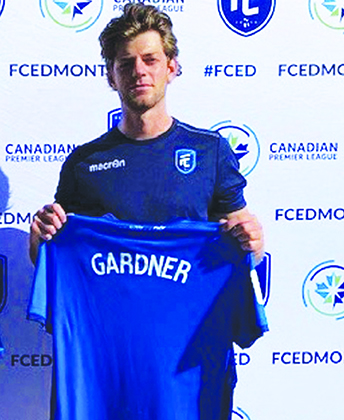 Sam Gardner, of the FC Edmonton soccer team in the Canadian Premier League, grew up in the Beach. Photo: FC Edmonton.

A graduate of Malvern Collegiate, who grew up in the Pine and Silver Birch avenues area, Gardner , 23, signed with FC Edmonton earlier this year.

Prior to that, Gardner had played university soccer on scholarships at Jacksonville University in Florida from 2015 to 2017. He played his final year of U.S. college soccer at Grand Canyon University in Arizona in 2018.

“In between university and FC Edmonton, I was offered a pro contract by a USL (United Soccer League) team in California that I ultimately decided was not in my best interest to sign at that moment in time,” he told Beach Metro News in a recent interview by email.

“I returned home and trained with a semi-pro club – Sigma FC in Mississauga.”

By signing with FC Edmonton, he has realized his dream of becoming a pro soccer player.

“Signing to become a professional was an unreal feeling, a dream come true really,” said Gardner. “To make my family and friends proud every day is a special feeling and a privilege I don’t take lightly.”

Gardner, who attended Balmy Beach and Glen Ames schools prior to going to Malvern, began playing soccer in the Beaches Community League at the age of five. By the time he was nine, he was playing rep soccer with the Scarborough Blizzard.

“I fell in love with the game at an early age and the competitiveness of the sport drove me to push myself to try and become the best I could be,” he said.

Gardner’s parents are from South Africa, and moved to the Beach before he was born.

He said the international nature of soccer and its accessibility to a wide range of participants also drew him to the sport.

“The fact that it is a global sport that didn’t require a lot of money to play appealed to me. No matter where you come from or what language you speak, soccer is an open sport that allows you to be whoever you want to be and make lifelong friends along the way,” said Gardner.

During high school at Malvern, he was a captain of the soccer team for the four years he was there.

A midfielder, Gardner is presently taking part in the CPL’s Island Games tournament which began on Aug. 13 in Prince Edward Island and continues until the middle of September. Like many other pro sports, the CPL has had to adapt its season to the realities of the COVID-19 pandemic. That means the teams participating are restricted to a sequestered “bubble” on the campus of the University of Prince Edward Island in Charlottetown.

So far, Edmonton FC has played six games in the tournament. The team has recorded five losses and one tie in those matches.

Gardner appeared in the third game against Atletico Ottawa, a 2-2 tie, and played 70 minutes. He also played 12 minutes in Edmonton’s fourth game, a 3-1 loss to the Halifax Wanderers.

Edmonto FC’s next match in the Island Games is Sunday, Sept. 6 against Pacific FC, who are normally based out of Vancouver Island.

Gardner admitted that being a sports “bubble” is a “bit strange” as players and team staff are strictly limited in their movements.

“Although we are tested for COVID-19 regularly and all tests have come back negative, we are still required to stay inside our hotel at all times, unless travelling to training or games.”

He said he is finding ways to stay occupied when not involved in soccer. “On non-game days, I typically play video games or read.”

Gardner shared that he was currently reading George Orwell’s 1984. “Other than that, I use the one hour of gym time each team gets to life weights as well as take ice baths regularly to help with recovery.”

While it may not exactly be the life of a pro soccer player as he imagined it at this moment in time, he said he is enjoying the experience.

“My short term goals are to play and win as many games as possible for the club and to bring joy to our loyal fans that they so deserve,” said Gardner. “I have long term goals of playing overseas one day, but I know I have to it day by day in order to get there.”

“I’d like to thank my close friends for keeping me on the right path and my family for being patient with me and always pushing me to pursue my dreams,” he said.

For more on the CPL’s Island Games, please go to https://canpl.ca/