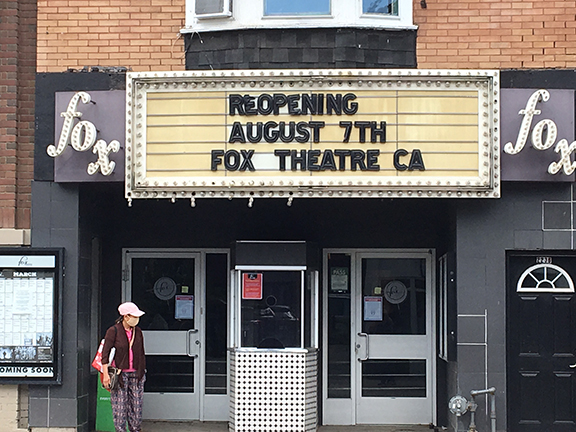 The Fox Theatre on Queen Street East reopens on Friday, Aug. 7. Inset photo: When COVID-19 forced the closure of the theatre back in March, they a message on the marquee letting know the community know they'd be back.

The Fox Theatre will be reopening its doors to the public on Friday, Aug. 7.

The theatre located at 2236 Queen St. E will be allowed to resume operations as part of Toronto’s Stage 3 of reopening businesses and amenities.

Daniel Demois, one of the Fox’s owners, said he’s excited to open doors to moviegoers after being closed for almost five months due to COVID-19.

“It’s something of a relief certainly, it’s great. We’ve been planning for months and trying to anticipate what the requirements will be…It’s nice when the planning is tied to a specific open date,” said Demois.

The theatre will be following COVID-19 safety protocols, including limiting the number of people attending indoor gatherings to no more than 50.

“We’re closing off every other row, and will have all the same things you see at other places like distance markers, and there will be counter shields at the snack bar,” said Demois.

Following Toronto’s mandatory mask bylaw, all patrons will be required to wear a mask or face covering inside the theatre. Much like indoor dining, patrons are permitted to remove masks to enjoy snacks during the film when seated.

“It’s our intention to keep it as safe as possible and to ensure people are keeping their distance and that all of these rules are followed. We feel confident that we can do that,” said Demois. He said that they did surveying about two months ago that indicated the majority of the 500-600 respondents were excited to get back to the movies with safety measures in place.

Demois said that the Fox Theatre has received a great deal of support from the community while closed.

“People started buying gift cards and memberships, even though they didn’t know when they’d be able to use them next,” said Demois.

Demois said that this provided a needed influx of revenue, as did the “seat sale” back in April when people could pay to have a plaque with their name or the name of a loved one to be on seats. He said the plaques will be installed within the next month or two.

“We couldn’t meet the demand for all the people that wanted to buy one, unfortunately. It was great, it was encouraging…It gives you such a nice feeling that you’re part of something that means so much to so many people,” said Demois.

Demois said that the movies being screened will look a little different due to the lack of new movie releases this year.

“It’s very strange to be running a theatre and not being quite sure what content will be available to you in the coming months. It’s bittersweet. We’re very happy to be open, but we’re a little nervous about what we’re going to play,” said Demois.

Demois said he hopes that the current lineup of showtimes will be interesting to the public, most of which are composed of fairly recent titles.

This coming Friday, the Fox Theatre will be opening with Portrait Of A Lady On Fire, Casablanca, The Booksellers, and Blood Quantum.

“I’m excited, the response so far has been good. We’re looking forward to opening on Friday and getting some people in those seats,” said Demois.

To learn more about the Fox Theatre and to view showtimes, please visit https://foxtheatre.ca/