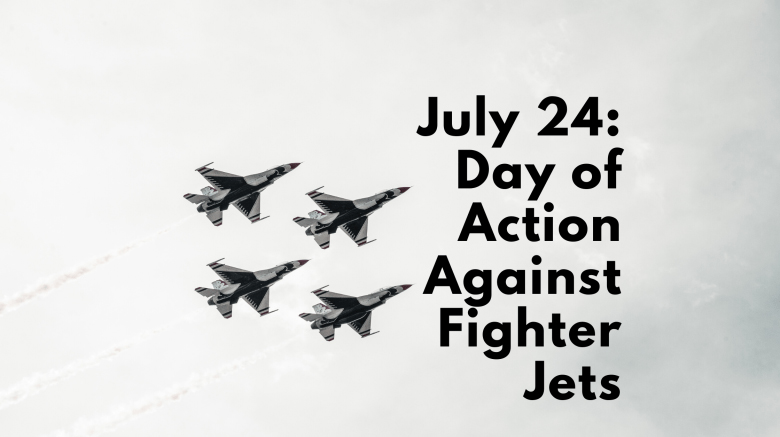 Today (July 24) is the National Day of Action Against Fighter Jets. In East Toronto, there will be a rally in front of Toronto-Danforth MP Julie Dabrusin's Queen Street East offices at noon.

The National Day of Action “Strike for Climate Peace: No New Fighter Jets” rally will be coming to East Toronto on Friday, July 24.

Demonstrations will be taking place in front of MPs offices across the country today as part of the National Day of Action, including in front of Toronto-Danforth MP Julie Dabrusin’s offices at 1028 Queen St. E. at noon.

The demonstrations are being held to object to the federal government’s plans to spend $19 billion on fighter jets. Those taking part in the National Day of Action are calling for that money to be used towards a Green New Deal and fighting the COVID-19 pandemic, organizers told Beach Metro News. The National Day of Action is being organized by the Canadian Voice of Women for Peace (VOW) and includes a broad coalition of other groups including churches and environmental groups.

In a letter sent by a number of local groups and residents to Beaches-East York MP Nathaniel Erskine-Smith, and also forwarded to Beach Metro News, organizers wrote: “We have no enemies other than the pandemic and other healthcare and inequality issues. The only beneficiaries from such a purchase are those who profit from war. We have had enough of that!”

Letter writers to Erskine-Smith include local residents Murray and Linda Lumley and Pastor Tim Reimer of the Danforth Mennonite Church.

The text of the open letter to Erskine-Smith from the Lumleys’ is below:

“I am writing to you on the National Day of Action “Strike for Climate Peace: No New Fighter Jets” to let you know that I am opposed to the Canadian government spending $19 billion on 88 new fighter jets. Today, demonstrations are taking place outside of the offices of Members of Parliament of all the political parties across the country. Canadians do not want the federal government to spend precious public tax dollars on a new weapon system, but want investment in a green new deal and a just recovery.

“Last year, the federal government launched a competition for a fleet of new fighter jets. It is the second most expensive government procurement program in Canadian history. This month, the bids are due by the weapons manufacturers. In the competition are Boeing’s Super Hornet, SAAB’s Gripen and Lockheed Martin’s F-35 fifth-generation stealth fighter. The federal government stated that it would select the winning bid in 2022. I do not want the government to buy any new fighter jets because they are not necessary, they harm people and they exacerbate the climate crisis.

“Former Deputy Minister of National Defence Charles Nixon and former Royal Canadian Air Force fighter jet pilot Sidney Popham argue that Canada does not face any credible threat that requires fighter jets and that they are not necessary to protect the country’s populace or sovereignty. As well, fighter jets are notoriously energy inefficient and consume a toxic specialized fuel called JP8. Fighter jets emit excessive carbon emissions and will cause the problem of carbon lock-in, which will prevent Canada from decarbonizing and meeting its Paris Agreement commitments.

“Canada’s recent deployments of combat aircraft have been deadly and destructive, such as in Serbia (1999), Libya (2011) and Iraq and Syria (2014-2016). Fighter jets are for fighting; that’s what needs to stop to make the permanent the UN global ceasefire and bring about global peace.