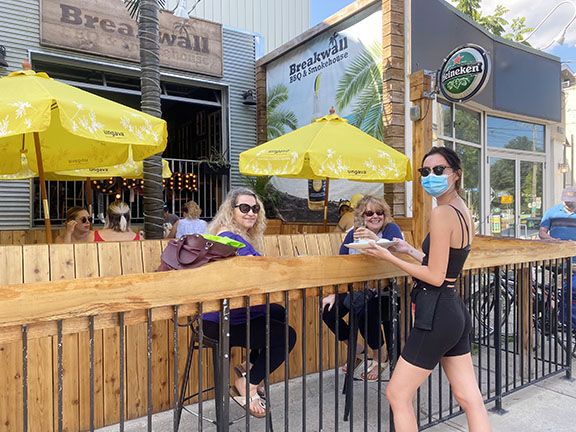 Customers enjoy a beverage and some food on the patio of the Breakwall on Queen Street East on the weekend of June 27, the first one after the City of Toronto moved to Stage 2 of the province's reopening protocol. Photo by Susan Legge.

Restaurants, bars, and cafés with outdoor patios are reopening in East Toronto. But for those that are open, limited seating remains a challenge and those without outdoor seating are desperately waiting on the city’s CaféTO program to allow for new and additional outdoor space.

The City of Toronto entered Stage 2 of the provincial reopening plan on Wednesday, June 24, which allowed restaurants, bars, and cafés to reopen for outdoor seating only – under strict COVID-19 guidelines issued by Toronto Public Health.

While business owners and customers alike are thrilled to patronize their favourite neighbourhood joints again – owners are feeling the pinch.

Amalan Vijeyaratnam, owner of Allen’s Restaurant on Danforth Avenue, said the guidelines laid out by Toronto Public Health were “straightforward.” But he’s concerned that other businesses in the area without outdoor patios are in need of assistance.

“I hope our neighbouring restaurants without patios have the opportunity to open up soon,” he said. “I don’t believe there’s been enough done to support them and time is becoming a factor.”

Down the street, 7Numbers Italian restaurant owner Vito Marinuzzi was happy to welcome “all the familiar faces” after his patios reopened. Under “the new normal,” he listed all the precautions the restaurant took in following COVID-19 protocols.

“We went through protocols issued by public health and implemented all of them,” Marinuzzi said. “Directional entrance and exit points, sanitize protocols for the rest rooms, all tables are spaced six feet apart, in between tables is a full spray down to reset it.”

“Masks are mandatory for all staff. We used these cool fluorescent marks and wrote the menus on the glass so there are no physical menus. And on and on and on – but it was worth it,” he added.

Physical distancing and outdoor patio use only has also led to reduced seating capacity for those that opened in Stage 2 – revenue of which doesn’t cover all the bills.

“We are using 25 per cent of our entire capacity, yet expected to pay 100 per cent of the rent,” Marinuzzi said.

The Danforth Mosaic BIA chairperson and Red Rocket Coffee owner Billy Dertelis added that the BIA is seeing reduced seating capacity of “at least 50 per cent on average.”

Businesses are happy to reopen and generate some revenue after months of uncertainty, he added. Other challenges include estimating the time to invest in personal protective equipment, and restrictions in accessing federal emergency loans.

“Restaurants with existing patios are feeling pretty lucky,” she said. “However, there are many who don’t have any outdoor space, so Phase 2 hasn’t changed anything for them.”

“The CaféTO program is going to be a lifeline for many restaurants and they really can’t wait any longer,” Sebert said.

The federal rent relief program CECRA was also extended for July, and Sebert called it a “huge positive for many of our members, but a large majority are going to be feeling the pinch for months to come.”

Customers have been compliant – restaurant owners said. People have been cooperative, willing to wear a face mask, and follow other health protocols.

CaféTO was unanimously approved by Toronto Council on June 29. The city program directs the city work with restaurants, bars, and cafes, to create new and additional outdoor dining space to allow restaurants to reopen and generate revenue.

The province is yet to announce when it will enter Stage 3 of its reopening plan.