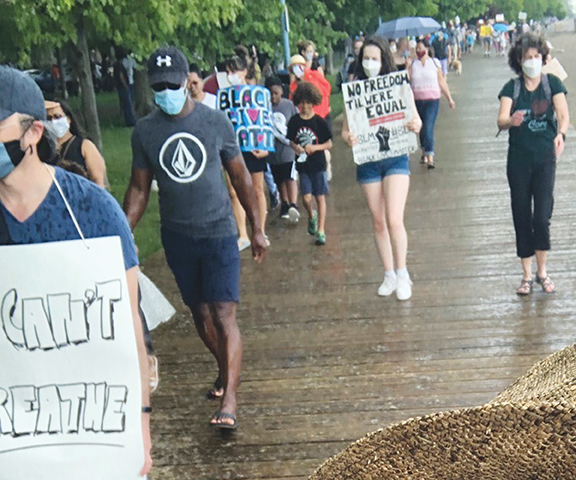 Residents take part in a Black Lives Matter march through the Beach and along the Boardwalk on the afternoon of Saturday, June 6. Inset photo, the march was organized by local resident Sapphira Charles, shown with husband Adam Smith and son Colm. Photos: Shah Ruby.

On Saturday, June 6 at 1:45 p.m. behind Williamson Road Public School there was a buzzing of Beachers, with heartfelt signs, kids and dogs in tow, ready to march in the name of justice.

Led by local resident, architect and activist Sapphira Charles and her family, many folks from the community began to walk while passionately shouting, “No justice, no peace, Black lives matter”. Their synchronized steps weaved around Glen Manor Drive to the Boardwalk and finished at the gazebo at Kew Gardens.

Throughout the march, many community members stood by cheering and joined the march to show their support, despite the downpour of rain midway through.

Earlier in the day, there were talks on social media platforms that the walk might be cancelled as it was suggested that the Beach community does not have many minorities to represent the Black Lives Matter movement. This was all the more reason to proceed and stand in solidarity and demonstrate that skin colour is absolutely irrelevant in standing up for justice.

Blushing pink, glowing olive, vibrant caramel to velvety espresso…love is love.  In hearing the voices echo “Black lives matter” there is a sadness, because OF COURSE they do! And yet, racism carries on in the ignorant.

Upon arriving at Kew Gardens, the sky welcomed the sun with open arms and some inspirational shares from Dex Blackstock, Eloise Morrison, Sean Manners and other folks in the community followed.

May this march and the many others shed light on human rights, and challenge the beliefs of those with both conscience and unconscious biases.

Above all, may this unfortunate time be a demonstration that together we can create change.

Shah Ruby is a Beach resident and business owner