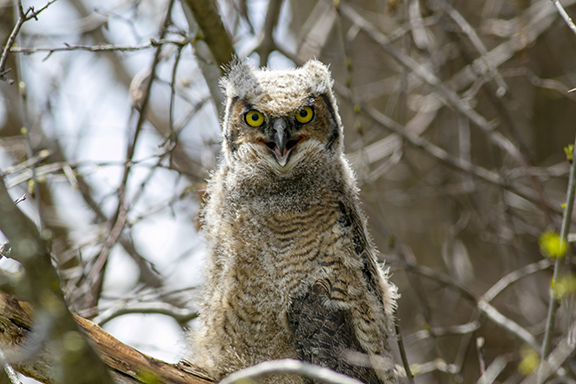 Wol the owlet has recently both branched and fledged the nest after being rescued earlier this spring. Inset photo, now is a good time to see migration birds such as this Blackburian warbler. Photos by Ann Brokelman.

First an update on Wol the great horned owlet:  Three weeks to the day after he was put in a new laundry basket nest, Wol both branched and fledged. The roller coaster of emotions from watching this little owlet have everyone who helped feeling exhausted.

On May 8 I went up to do my usual check to make sure all was well.  We had had no activity on the wireless camera the night before so I was pretty sure something was up.

Jose, who first discovered Wol on the ground, and I walked into the woodlot and could immediately tell that the nest was empty. We looked in the trees and of course on the ground again.

In my mind I pictured Wol running around the woodlot having a great time, though of course I also worried because it would still be dangerous for him to be down there.  After an hour we had had no luck and were feeling quite frustrated.

I’ve been doing this for so long that I think I’m always passively listening for bird calls, and it was right at that moment of frustration of not finding Wol that I clued into the repeating call of a brown thrasher.

There was nothing special about the thrasher’s call, but it caught my attention and I looked for it. I followed the sound to a fence, where the thrasher was sitting, and I don’t know if a movement caught my eye or what, but there, above the fence on a branch, was Wol.

I called Jose and we stood and watched this beautiful, now significantly bigger, owlet enjoying the sunshine. What a beauty.

Jose’s daughter, Ellen, and grandchildren, Teresa, Paul, and Stu came as well.  I don’t know if I’ve ever had such a clear and beautiful view of an owl before.

I called Shades of Hope to update them on the good news. That night I was waiting for the ping sound of the wireless camera to tell me Wol had returned, but the owlet never showed up.  I talked to Stu, who helped build the laundry basket nest, and we both agreed that we were happy Wol had fledged and was progressing as hoped, but that we missed seeing him every day. With a little luck you might spot ruby-throated hummingbirds, Baltimore orioles, rose-breasted grosbeaks, house finches, warblers and indigo buntings. Soon the tree’s buds will be fresh leaves and it’ll be much harder to spot these birds. Try to get outside and enjoy the spring migration sightings while you can, while maintaining social distancing of course.

Keep you eyes open for foxes and other mammals who have also recently had babies.

The now-famous fox kits at the boardwalk are still there, but please keep your dogs on leash, take just a quick peak if you must, and keep on moving.  I recently learned that Toronto Wildlife Centres is sending volunteers to help keep people moving for the safety/well being of the foxes.  Sadly, we found out late last week one of the kits had been killed, most likely by an off-leash dog.

Despite my love for these animals, I have decided against adding myself to the foot traffic and have, instead, stayed up to date with the fox family through Beach Metro News.