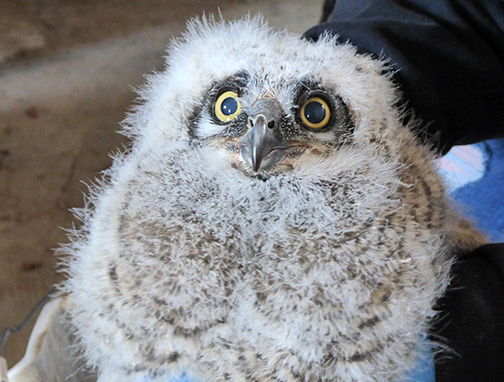 This baby great horned owlet was rescued earlier this month by the Shades of Hope Wildlife Refuge group. Photo by Ann Brokelman. Inset photo shows the nest and one of the parent owls taken by a webcam.

April 17th was a special day for Josette and her daughter, residents of Kawartha, a great excuse for me to get out of the house, and a very lucky day for a great horned owlet!

Today’s story began when Josette, after having observed an owlet sitting prone on the ground near her house for several hours, called Shades of Hope Wildlife Refuge for advice. After getting instructions, Josette and her daughter put the owlet in a box, along with branches and leaves from the ground, and then covered the box to keep its new resident warm and safe until help could arrive.

Stu Johnson and Paul Kelly, from the Team Chelsea lost pet rescue organization, were already in the area doing a dog rescue, but they were able to take time to check the location for a nest and see if the owlet’s parents were still around.

They quickly found the nest, though it was about 40 feet overhead in the spruce canopy. Just think about that: the baby great horned owlet had fallen from the equivalent height of a three-storey house! The poor thing was too young to climb back to safety; it needed help!

It was at this point that Shades of Hope called me to ask if I could go up, check out the owlet, and meet Stu and Paul to help re-nest the owlet.

I arrived at the same time as my friend Teresa Boyle-Middleton who agreed to help me. Although the baby didn’t seem to be in any pain, we decided it would be best to take owlet for a proper assessment at Shades of Hope.

Once there, the owlet was re-hydrated and fed a small amount of food. It’s important to not feed too much, as we wanted him or her to call out for the adult great horned owls once it was back in the nest.

When we returned, we found that Stu and Paul had been busy building and securing a new nest, made out of a laundry basket, in the original tree.

It was safer to build a new nest, as it was more likely the baby would just fall out of the old one again. I’ve been told the parents don’t seem particularly fussed about moving into a new nest… would you be upset if someone built you, for free, an upgraded home? A wireless webcam was also included so we could watch to see if a parent returned.

If, after 24 hours, the great horned owl parents did not return I would have to take the owlet to The Owl Foundation to be put with a foster owl mom.

We all went back home, with fingers crossed, hoping all would go well. Ten minutes after I left I had a call from Stu telling me the owlet was on the ledge of the basket, but hadn’t fallen out. This was the hardest part: waiting.

I talked to Josette to help pass the time, and she and her daughter had decided to name the owlet Wol, after an owl from Farley Mowat’s Owls in the Family.

At about 8 p.m. I received a text from Stu asking me to guess who was at the nest looking in. The webcams caught photos of one of the parent owls watching over Wol. As of April 19, both mom and dad owl had been with the owlet and seemed satisfied with the new nest.

Thanks to Shades of Hope for all your work. If you find this as amazing as I do, you can make a donation at www.shadesofhope.ca/donate

I’d also like to point out that we all did our best to maintain social distancing and didn’t take any unnecessary risks while helping out little Wol.