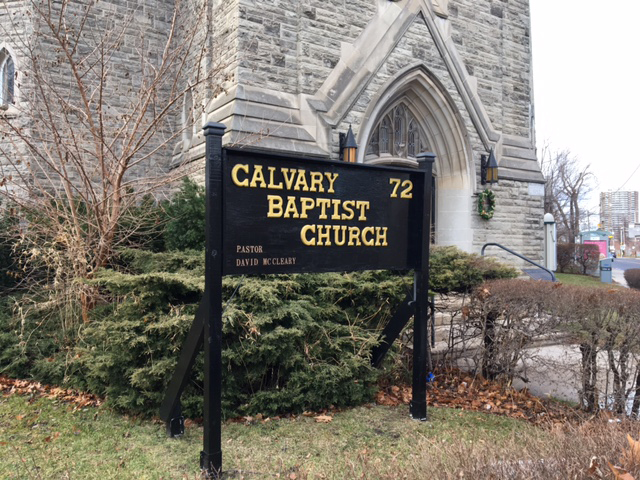 Happy New Year! My name is David McCleary and I am the pastor at Calvary Baptist Church. We are a historic convention Baptist church that has been trying our best, by the grace of God, to faithfully serve the Beach community for the last 125 years.

We are grateful for the time we have been able to spend in this community, loving God, figuring out how to consistently love our neighbours, and working on contributing to the quality of life for the larger Beach community as we try to follow Jesus’ example of loving our neighbours as we learn to love ourselves better.

When I was a kid, the year 2020 seemed so far away. I thought for sure we’d have flying cars, underwater cities, and weekend holidays on the moon… or at least world peace.

Like me, I think many people believed that at the start of the end of the teens and the beginnings of these new twenties (roaring twenties was already taken – maybe the #awe-filled20’s?), we would be closer to having these things as lived realities.

I don’t think I’m alone in these beliefs, or in wondering why in a year like 2020, our individual and collective visions of what it means to live and love and be together equitably, constructively, and fairly in this world aren’t a little clearer.

You’d think that in light of the evidence that global temperatures are rising, that refugees and immigrants are contributing positively to our country over the years, improved recognition of the rights of women, racial and religious minorities, and LGBTQ people – you’d think that all around the world there would be a more crystalized view of humanity’s future!

A recognition of the interconnectedness of all peoples, and a shared vision full of more beauty, kindness, dignity, and love, regardless of where you come from, or what you look like, what you’re going through, or whom you love! You’d think that by 2020 we would all have a clearer vision about what it means to step together into a better, shared future!

But somewhere between all the happenings at the end of last year, fires in the Amazon and Australia; continued lack of clean water on First Nations lands at home, and the beginning of this new one, violence in Iraq and Iran; hate motivated attacks in the United States and outburst of tragedy and violence in the streets of our own city, maybe some of you, like me, felt your vision had blurred.

Maybe it happened somewhere in the haze of the holidays, maybe it was in the frenetic pace of visiting or getting everything done that needed doing, maybe it was a little bit too much of this, that, or the other thing offered during the many times of feasting as we gathered with family and friends, maybe things this new year have not felt as clear as we wished they could be, or thought they should be.

For me, at the start of this year, I found it harder and harder to escape the creeping miasma of sadness when I looked at the state of things. Because flashing before me in the news, on my social media feed, and on my doorstep was some new constant sadness propagated by the failings of the human condition, writ so large, clamouring for my attention, that it was impossible for me to ignore!

And instead of looking at this year with anticipation and gratitude, there was instead an unusual and unsettling sense of dread that crept over me, spreading a pall over the joy of greeting a new year.

And for a while there, I must admit that it occluded and obscured my view of things, and my experience of life. I simply could not fully embrace the joy inherent in starting a new year! But then during my daily meditations and reflections, as I read the Bible, I came across this passage from a letter written to people struggling through persecution and life threatening difficulties in a town called Philippi. Philippians chapter 4 and verse 8 says this: Finally, brothers and sisters, whatever is true, whatever is noble, whatever is right, whatever is pure, whatever is lovely, whatever is admirable—if anything is excellent or praiseworthy—think about such things…

There is an inspiring story that I heard which shed a little more light on this passage for me.

During the years of the Vietnam War, there was a pastor and peace activist named A.J. Muste. Almost every day, Mr. Muste stood out in front of the White House night after night with a candle in silent vigil. Often times he was alone! One day, a bemused reported interviewed him and asked the question that was probably on everyone’s mind. “Mr. Muste,” said the reporter, “do you really think you are going to change the policies of this country by standing out here alone at night with a candle?”

Undaunted, Pastor Muste replied, “Oh, I don’t do this to change the country, I do this so the country won’t change me.”

There is no denying we are in some difficult and dark times as we start 2020 – and not just because I’m not going to the moon this weekend. We must continue to fight racism, sexism, hunger, homelessness, climate change, and so many other evils that impact us individually and collectively.

But rather than give in to the grim clamouring evidence that things are broken in this world, I would rather resist. Rather than retreat into myself and away from those troubling realities, I would rather fight to make this world, and in particular our corner of it here in the Beach, in Toronto, in Canada, a better place for all of us.

And on that road ahead I have chosen, I will do life differently in order to be a different person – together with my family, my neighbours, our community, and the members of my congregation at Calvary Baptist Church, we will work towards being better versions of ourselves, as we together amble, stumble, fall, and get up again, as we together seek to advance down the road to a better future!

I would rather light a candle than curse the darkness. I would rather work in my small corner of the world to make the differences that I can.

In this New Year I commit to labouring to repair and reveal the inherent beauty in the world through what I decide to focus on or help with alone and in community. I invite you to do the same; I invite you to join us in our efforts to make the world a better place, and to make efforts of your own.

The world needs each of us, and our individual and collective gifts, to be aiming for the moon, to shine a light in order to resist, remake and overtake the darkness!

I wish you all a stellar (and lunar) new year.