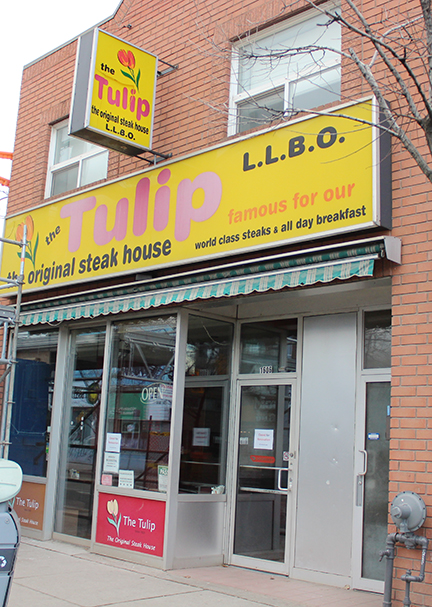 The Tulip restaurant announced on Jan. 1 that it would be closing after more than 30 years in business in the Queen Street East and Coxwell Avenue area.

Legendary Toronto restaurant The Tulip, on Queen Street East just west of Coxwell Avenue, announced on Jan. 1 that it is closing its doors.

In a statement posted on The Tulip’s Facebook site early yesterday afternoon, the restaurant said it was with “great sadness” that it was announcing the closure.

The full statement is below:

“To our wonderful guests, regulars and Tulip Family.

“Thank you for all your support over three decades. It is your patronage that has allowed us to do what we love for so long, and to be as much a part of our lives as we have been in yours.

“It is with great sadness that we must announce that The Tulip has closed. Unfortunately, business conditions have changed regarding our lease agreement in ways we can no longer accommodate, and we have been left with no choice.

“While this may be the end of this chapter, a new one is only a page turn away.

It is not known when, or if, The Tulip will re-open but one of the owners (who did not want their name published) told Beach Metro News that they are looking for a new location in the same Coxwell and Queen area.

Over the years, the restaurant has earned a reputation for some of the best steaks in the city at the most reasonable prices.

Hundreds of customers posted comments when the Facebook post announcing the closure was first made by The Tulip.

The owner said that the decision to not announce the closure until New Year’s Day was made to avoid a rush of customers on Dec. 31 which might have led to disappointment among those trying to have one last meal at the restaurant.

The owner said that along with serving its loyal customers, The Tulip also catered numerous film and television production in the East Toronto area.

“I had to tell four studios that we wouldn’t be able to cater for them anymore and they were crying when they heard the news,” said the owner. “My phone blew up after I posted it.”