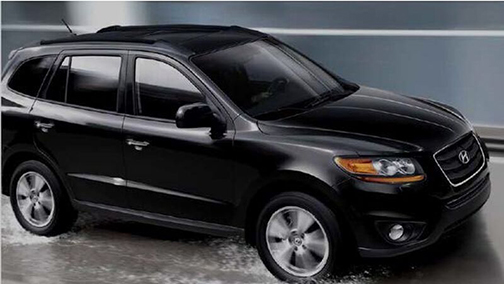 Toronto police have released this photo of a 2007-2012 Hyundai Santa Fe, the same kind of vehicle being sought in connection with the death of Matthew Dreaver, 16, on Oct. 7. Police have also released a video of Dreaver being struck by the vehicle on the driveway into the Stan Wadlow Clubhouse on Cedarvale Avenue. The video can be viewed on the Toronto police Youtube channel, but readers are warned that it contains graphic content of Dreaver being struck by the vehicle.

Toronto police have released a video which shows more details surrounding the murder of a 16-year-old East York boy in early October.

Matthew Dreaver, 16, was intentionally struck by a vehicle early on the morning of Monday, Oct. 7, in the Cedarvale and Bracebridge avenues area.

The incident took place at approximately 2:26 a.m. and Dreaver was accompanied by another teen when he was run over by a dark-coloured SUV which police believe to be a Hyundai Santa Fe.

The video, which contains graphic content, shows Dreaver and a 14-year-old friend running on to the driveway of the Stan Wadlow Clubhouse on Cedarvale as they are being chased by the person driving the SUV which then hits and drags Dreaver under the vehicle.

While the friend with Dreaver leans over him to check on his condition as he is on the ground, the SUV turns around at the end of the circular driveway and drives right past the pair of them.

The driver of the SUV then fled the area heading north on Woodbine Avenue, east on O’Connor Avenue and then east on St. Clair Avenue East, police said.

Dreaver was rushed to hospital where he died of his injuries later that morning.

The suspect vehicle is believed to be a 2007-2012 Santa Fe that is either black or dark blue in colour and may have front-end damage.

Det. Leslie Dunkley of the Homicide Squad said the boy was “intentionally struck” by the vehicle during an update to the media on the afternoon of Tuesday, Oct. 8.

“He was run over to be blunt. There is no justification to do what that individual did.”

At that time, Dunkley added that Dreaver and his friend were among a number of people in the area who had interactions with two men who were in the SUV.

Along with the video of the incident, which can be seen on Youtube, police also released a photo of what a Hyundai Sante Fe in the model years of the suspect vehicle looks like.

Police warn that the video at https://www.youtube.com/watch?v=aXnnlW77I4I&feature=youtu.be is graphic and contains disturbing content of Dreaver being hit by the vehicle and his friend’s reaction.