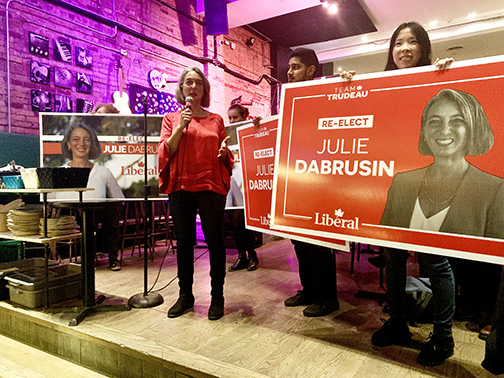 Julie Dabrusin speaks at her election night party on Monday at Relish on the Danforth after being re-elected as MP for Toronto-Danforth. Inset photo, supporters gather for the party at Relish. Photos by Corbin Hucker and Susan Legge.

Liberal incumbent Julie Dabrusin held off a strong challenge from the NDP to win her second term as MP for Toronto-Danforth in the Monday, Oct. 21, federal election.

Other candidates running in Toronto-Danforth were the Green Party’s Chris Tolley (with 3,676 votes); Tara Dos Remedios, of the People’s Party of Canada (with 616 votes); Elizabeth Abbott, of the Animal Protection Party of Canada (with 260 votes); Independent candidate John Kladitis (with 209 votes) and the Communist Party’s Ivan Byard (with 154 votes).

The seat was won by Dabrusin in the 2015 election in a very close race with NDP incumbent Craig Scott. The riding had long been held by late NDP leader Jack Layton, who was Toronto-Danforth’s MP from 2004 until his death in 2011. Scott won the riding for the NDP in a 2012 byelection.

The closeness of the 2015 election, and the history of the riding along with its link to the legacy of Jack Layton has made Toronto-Danforth a priority for the NDP to win back in 2019.

Federal NDP leader Jagmeet Singh made a number of stops in both Toronto-Danforth and Beaches-East York during this fall’s campaign, stressing the riding’s NDP history and its long association with Layton.

At a campaign  event in late September, Singh told Beach Metro News that winning both the ridings for the NDP was “very important” to the party and he was “extremely confident” they would do so.

Dabrusin told Beach Metro News at her election night party at Relish on the Danforth that she was honoured to have been re-elected by the voters of Toronto-Danforth.

“I’m really excited,” she said. “I love our community and I love representing our community. I am really honoured that the people have chosen me to continue in that role.”

Toronto-Danforth’s boundaries are Coxwell Avenue to the east, Lake Ontario to the south, and roughly the route of the Don River to the west and north.

According to Elections Canada, there were 81,283 registered voters in Toronto-Danforth and 56,990 of them cast their ballots for a voter turnout of 70.11 per cent.