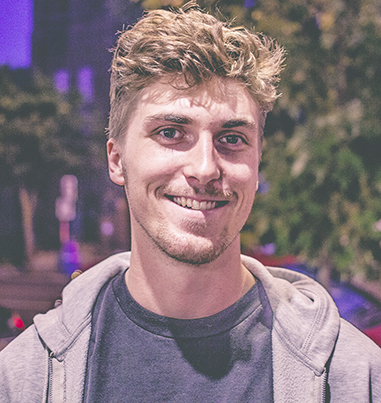 Ivan Byard is running in Toronto-Danforth for the Communist Party in this month's federal election.

(EDITOR’S NOTE: Candidates were asked to keep their answers to approximately 150 words. Answers have been edited in some cases to keep them as close to the agreed word count as possible.)

I am a 21-year-old fourth year student in the Bachelor of Public Relations program at Centennial College. I work part time in the entertainment industry as a technician. I grew up in Toronto–Danforth, continue to live here and strive to be an active community member. I became involved as an activist in high school during the Harper years. Decisions such as the bombing of Libya and Syria, the anti-democratic bill C-51, and giving millions in corporate welfare to General Motors prompted me to stand up and fight for our rights. People’s movements like Idle No More, Black Lives Matter, and the Quebec Student Strike inspired me to act and demonstrated that extra-parliamentary activity could effectively pressure governments and corporations into concessions.  I am running so our community has the option to choose a platform of peace and disarmament and one that puts people and nature before profit!

Yes, the Communist Party is campaigning on a ban on handguns and assault rifles.
However, when we talk about guns and violence we need to broaden the conversation. I think Toronto is overpoliced. Our annual police budget is over a billion dollars. We need to start demilitarizing our police forces and reinvest some of those funds into training for police, more civilian oversight and Special Investigation Units. Furthermore we need to seriously address the issue of hate groups being trained to use arms inside the Canadian Armed Forces.

The issue I think I could have the biggest impact on in Toronto—Danforth is social services. We have seen the harsh effects of austerity and the housing bubble in our community. Schools like Eastern Commerce have closed, childcare costs are skyrocketing, programming at community centres has been rolled back, and the cost of living continues to outpace after tax wages.
That’s why the Communist Party runs on a platform of expanded universal social services. Enacting a livable guaranteed annual income in conjunction with a full employment policy; expanding medicare to include pharmacare, dental, vision, long term and mental health care; building one million units of public housing alongside introducing strict rent-geared-to-income laws; expanding paid leave for new parents; and investing in cultural and leisure programs that are available and accessible to all. As an MP I would fight tooth and nail to ensure funding for social services are not cut. I would filibuster any legislation that gives funds to the military or corporations. I also pledge that the only compensation I would take is the wage that I am proposing for the federal minimum, as it is sufficient living wage; the rest I would donate to Toronto Community Housing.

Canada is home to more than one nation. It is a prison house of nations, with English Canada as the chauvinistic oppressor of Indigenous nations as well as the Quebec and Acadian nations. So one important ‘national’ issue would be the sovereignty of all nations and their right to self determination (including the rights to veto resource projects, just settlements for all land claims, and to succession). There’s lots of outrage that the liberals gave 4.6 billion dollars to a Texas oil giant but what’s worse than that is how the federal government is imposing the pipeline construction with the violent force of the RCMP on nations such as the Wet’suwet’en First Nation. The NDP and Greens are also complicit in violating sovereignty with the continued construction of the Site C dam in B.C.  despite opposition from Treaty 8 First Nations.
A more ‘federal’ issue is pursuing a policy of peace, disarmament, and non-interference in the affairs of other states. The Communist Party is calling for a 75 per cent reduction in the military budget and for a complete withdrawal from NATO, the greatest threat to peace. Donald Trump has escalated tensions and brought the world closer to the brink of war, with staunch support from a Canadian government willing to do his bidding.