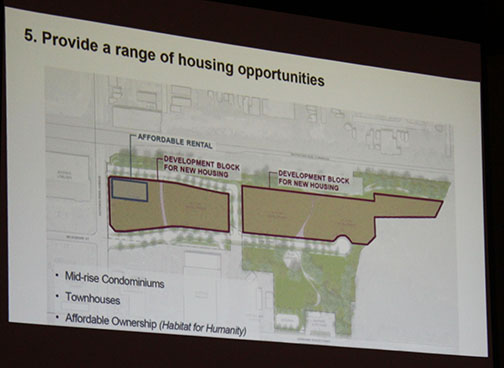 The latest plan for the Quarry Lands in southwest Scarborough was revealed by DiamondCorp and Kilmer Brownfield at a meeting held Monday, Sept. 23, night. Inset photo, residents attend the meeting at Birchcliff Bluffs United Church. Photos by Alan Shackleton.

Development on the city owned portion of the Quarry Lands took another step on the long and slow path to becoming a reality at a community meeting Monday, Sept. 23, night in southwest Scarborough.

About 100 residents gathered at Birchcliff Bluffs United Church were told that developers DiamondCorp and Kilmer Brownfield have joined together to create a plan calling for a mix of low-rise residential buildings (approximately six to 10 storeys), townhouses, affordable housing and park land on the site located just northeast of Victoria Park Avenue and Gerrard Street East.

Monday night’s meeting was a chance for the city’s real estate agency, CreateTO (formerly BuildTO) to announce the developer and to give residents a first look at what is admittedly a very preliminary plan for the approximately 19-acre site.

”We have not made an application to the city yet,” said Laurie Payne of DiamondCorp to those attending the meeting. “There’s a full process we have to go through with the city and with you to plan for this site.”

The Quarry Lands are really two development sites, one of which is owned the city.

Monday’s meeting was only about the city owned portion east of Victoria Park Avenue which runs approximately between Gerrard Street East to the south and the railway line to north. The city’s section of land runs east to approximately being even with Tilburn Place which deadends at Gerrard on the south side.

The other property is located east of the city’s land and is usually referred to as the Conservatory lands as it was owned by a company called the Conservatory Group but is more recently known as GCD. That site continues east between the railway tracks and Gerrard and then a portion of Clonmore Drive. That site was approved high-rise residential in the 1960s though no building applications have been put through for it.

Further complicating development plans for the area is that both sites are the former homes of sand and gravel quarries, a brick-making operation and a former municipal landfill.

For almost 20 years, the lands have been the subject of numerous studies, meetings, consultations and development plans.

Scarborough Southwest Councillor Gary Crawford told the meeting it was the “most complicated piece of land development in the east end.”

Back in 2015/16, a plan for the city’s portion was approved by Toronto Council which would have included low-rise residential, park land, and a retail store on the site.

However, CreateTO was unable to get a commitment for the retail component and that plan did not become a reality.

“We have eliminated the commercial in favour of more low-rise residential, and an affordable housing program,” said Don Logie of CreateTO at Monday’s meeting.

He added that the removal of the commercial aspect of the plan has resulted in a reconfigured park location and more park land in general. Though not finalized, the park aspect of the plan revealed on Monday will be about 4.5 to 5 acres.

The plan did not have final numbers on exactly how many buildings and units there would be on the site, but the affordable housing component is planned to be worked on with Habitat for Humanity and will be in the northwest corner of the site. It is estimated there will be somewhere in the area of 70 to 120 affordable housing units which will be a mix of owned and rented.

Dealing with contaminated land on the site, traffic and what amenities the park will offer were among the questions asked by residents at Monday’s meeting.

Logie said all work on remediation of the land and how any contaminated soil will be dealt with will be monitored by the Ontario Ministry of the Environment (MoE) and there are strict rules on how this has to be done.

“We have already worked with the MoE on this site and will make sure environmental concerns are dealt with,” said Logie, adding that those costs will be paid for by the developer not the taxpayer.

One resident expressed concern about traffic along Gerrard Street East and Clonmore Drive during rush hour and what impact the addition of all the extra residents will have.

Though there was no specific answer to address traffic in the area, it was pointed out that the plan revealed on Monday will not exit any streets onto Gerrard.

The intersection of Musgrave and Vic Park, which now has traffic lights for the plaza entrance but is slightly off kilter, will be redesigned so it lines up properly and allows access into the plaza at a point further east.

Park amenities were also a major topic of interest at the meeting.

Jennifer Kowalski, Manager of Parks Planning for the City of Toronto, told the meeting there would be numerous opportunities for the community to meet and help determine what will be in the park.

“This plan gives us a lot more space to work with, and we want the community to help us build and design the park,” she said.

Another question asked at the meeting was if there could be consideration to making a north-south link for pedestrians and cyclists that would go over (or under) the railway line.

Crawford said residents will be kept up to date on the plans for the site, and be given lots of opportunities for input and suggestions.

“We will be having many more of these meetings as we get more information on the plan,” he said.

It was estimated at Monday’s meeting that given the time needed for community input, council approvals, MoE approvals and more, that actual building at the site would not start until 2021.

“We will be talking a lot more about this in the coming months and years,” Crawford said.