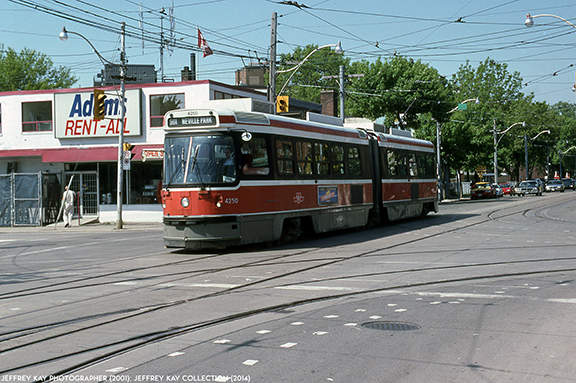 The TTC's two remaining articulated streetcars make their final runs on Labour Day. This photo from the TTC archives was taken by Jeffrey Kay and shows one of the ALRV's crossing Queen at Coxwell in May of 2001.

The TTC will be officially retiring its last two articulated light rail vehicle (ALRV) streetcars after more than 30 years of service on Monday, Sept. 2, Labour Day.

The streetcars are both set to run on Queen Street from 2 p.m. to roughly 5 p.m., and the rides will be free on those ALRV vehicles on Labour Day.

One of the streetcars will depart from the Russell Carhouse near Queen Street East and Greenwood Avenue, and will run west to Bathurst Street. The second streetcar will depart around the same time from Bathurst and Wolseley Streets and later join Monday’s Labour Day Parade which culminates at the Canadian National Exhibition.

Service on both of these streetcars will be free all day on Labour Day.