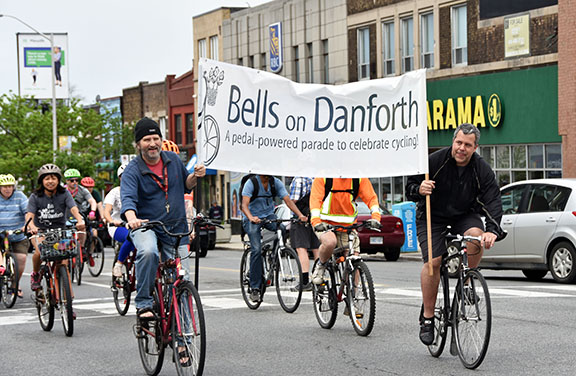 Toronto Council recently voted in favour of a pilot bike lane on Danforth Avenue from Broadview to Victoria Park avenues, a project that is expected to start by 2020.

The goal is to turn Danforth Avenue into a “complete street,” meaning a street that is safe for pedestrians, cyclists, drivers, and those who take public transit.

“I’m glad to see Danforth Avenue included as part of the near-term cycling implementation program. Danforth is one of the most heavily used cycling thoroughfares in the city without a dedicated bikelane. It is also the critical link in completing an east-west cycling connection through the heart of Toronto,” said Beaches-East York Councillor Brad Bradford in an email to Beach Metro News.

“It’s such a great thing to see local councillors pushing for this. It’s been a long time coming,” added Kathleen Mackey, a member of the cyclist advocacy group 32 Spokes.

Council voted in support of the Cycling Network Plan, which aims to improve cycling infrastructure throughout Toronto, at its July 16 meeing.

“We’re really excited for this because Danforth is so wide…it’s not a great use of space,” said Mackey. “It’s not just us—we don’t want just a bike lane—we want a complete street that works for everyone.”

Right now, Toronto Council has requested that Transportation Services report back to the Infrastructure and Environment Committee by the first half of 2020 so the Danforth Avenue Planning and Complete Streets Study can make informed decisions

Decisions on the installation of bike counters to demonstrate trends in daily cycling volumes as well as additional consultations with councillors, BIAs, and residents’ will be assessed by this report as stated in The Cycling Network Plan Update.