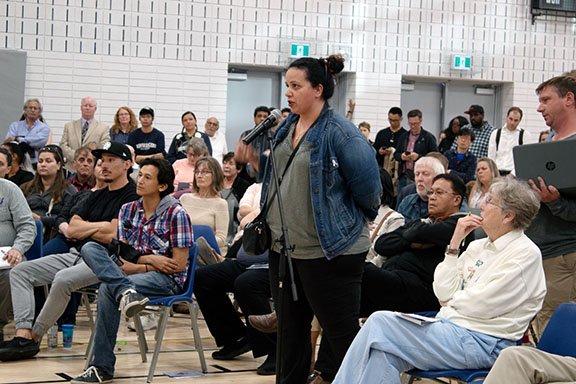 Frosa Rouvas talks about parking and traffic concerns during a tense community meeting on a proposed healing lodge for Indigenous women in Cliffside. Photo by Rhythm Sachdeva.

A proposed 24-bed healing lodge in southwest Scarborough for Indigenous women on parole or bail, has sparked controversy among area residents.

However, the meeting transgressed to an ideological debate about colonized land and race; with a lot of concerns left unanswered.

“We almost couldn’t wait to have this meeting tonight to answer the questions because there was such interest through social media,” said Scarborough Southwest Councillor Gary Crawford, who was one of the speakers present.

“I really feel that we needed this dialogue here tonight.”

Crawford’s Facebook page was met a lot of resistance when he announced the plan for the lodge a month ago.

“Misinformation was the real issue. A fact sheet should clear up a lot of residents’ concerns,” he said in a phone interview with Beach Metro News, before the meeting.

As promised, information pamphlets were handed out to all residents at the meeting and the first half of the event was given to the TWHLS’s director, Patty Pettigrew, to explain the project. The architects of the proposed lodge were also present for consultation.

The six-storey building is proposed for the corner of Kingston Road and Cliffside Drive. It will provide restorative care, supportive housing and gathering spaces for cultural programming, including an outdoor sweat lodge. The healing lodge would be the first of its kind in Ontario and only one of three in the country, Pettigrew said.

However, many people at the meeting wanted nothing to with the facility being in their neighbourhood.

“Why are you bringing in criminals to our community?” asked one resident after reading out some statistics about the most common crimes committed by Indigenous inmates.

Many parents in the area said they were worried that the location of the lodge is very close to the two local schools: Cliffside Public School and Birch Cliff Public School.

Their comments were met with accusations of racism and ignorance from some in the audience.

Another resident gave an impassioned speech about how he came from colonized land, and that this lodge should be seen as “a step towards reconciliation with the people who this land belongs to.”

“What kind of world do we want to leave for our children? The kind based on reconciliation with the people whose land we’re living on or one based on conflict and arrogance?” he said.

He was greeted with enthusiastic cheers.

Both comments, with only minutes separating them, became the trigger for a heated debate about integration and solidarity. Several residents stormed out in the middle of the discussion.

“You can’t say anything right if you’re white,” said Annie Whitman, whose toddlers would be attending a school near the lodge.

“I care about the safety of my children and the majority is with me. But we can’t say anything. If we do, we’re racist.”

Another notable point of contention at the meeting was the issue of parking.

One local business owner, Frosa Rouvas, who owns an auto service store on Kingston Road said at the meeting that she was approached three months ago by the healing lodge. They wanted to lease four parking spots, she said.

When TWHLS announced that they would only be building one parking space, Rouvas was enraged.

“I pay $12,000 a year in property tax. That is my property. It is for nobody to park on and I don’t want to have to enforce security or pay for towing cars,” she said. “There is going to be illegal traffic everywhere.”

Pettigrew promised to sit down with Rouvas and find a solution together.

Thunder Woman was originally scheduled to go to Scarborough’s Committee of Adjustment on June 27 to seek approval, but it was announced on Friday that they plan to defer the application.

Pettigrew said she would work to organize sessions for smaller groups of residents, perhaps 15 or 20 each time, with concerns about the lodge.

The next Committee of Adjustment meeting after the June meeeting is on July 25.