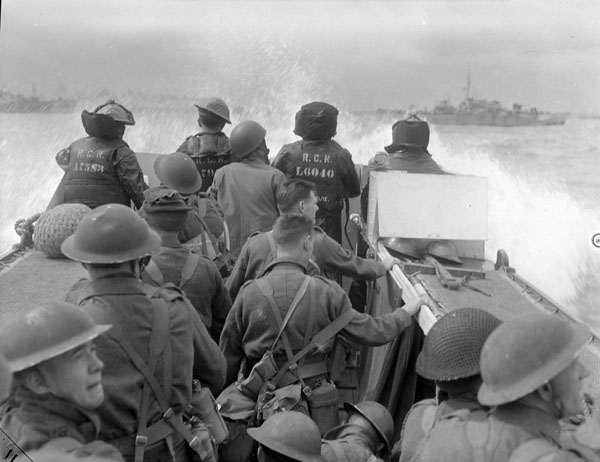 On the 75th anniversary of the D-Day landings this week, many Canadians will be wondering what it was all about.

According to an Ispos poll conducted earlier this year, only 48 per cent of respondents could correctly answer three of six questions in a simple quiz about what is, arguably, the most famous date of the Second World War: June 6, 1944. A total of 14,000 Canadians took part in the greatest invasion in history, landing at Juno Beach on the Normandy coast, in a three-nation effort that led to the final defeat of the German army in May 1945.

In an exercise I led with a group of Grade 10 students a few years ago, most of them did not notice the significant date when it appeared in the documents we were studying, though they had recently been told about D-Day in class. (Some even said they couldn’t read the cursive writing in the documents.)

My own three sons, who are regularly treated to stories from Dad about war history, sometimes had a hard time telling the two world wars apart, although they all knew about D-Day. It’s not surprising: This is the way knowledge of our past recedes in memory as new generations replace older ones and personal connections to events are lost.

My father told me about seeing the armada of planes heading overhead that night while he was serving with the Royal Canadian Air Force in Yorkshire, England. And who can forget the 1962 blockbuster movie The Longest Day with its all-star cast acting out the events of the invasion based on a best-selling book. Ah, but then I am dating myself…

In 1944, all of Canada and the rest of the world knew that an invasion to drive the German Army out of occupied Europe was imminent. The Russians, who had been carrying the main effort against the Germans since 1941, had been calling for a “second front” for two years. So, when Toronto woke up to read the news of the landings on June 6, it was confirmation that the war was nearing its end after five years, longer than the First World War had lasted.

Many men from the Beach took part in the D-Day landings or supported it from the air and on the sea. I began my research into the men of Malvern Collegiate many years ago as the annual French class trip was planning to visit Beny-sur-Mer Canadian War Cemetery, located just inland from Juno Beach, the Canadian landing site that day.

That is how I learned about two men, Sgt. Morris Murray, RCAF, and Corporal Cameron Leaner Jones, of the 7th Canadian Reconnaissance Regiment, 17th Duke of York’s Royal Canadian Hussars.

Murray was the navigator in a Halifax bomber sent to destroy artillery emplacements on the invasion beach near Mont Fleury. He lived at 90 Kingswood Rd., graduated from Malvern in 1933 and worked at the Inglis plant as an accountant. Although he had already volunteered for the air force in the summer of 1942, Murray married his girl Fern Hillier just before sailing for England. He was a new recruit posted to Holme-on-Spalding-Moor airfield when, on the night of June 5, he and his crew from 76 Squadron, RAF, took off from their base in Yorkshire, and crossed the channel as part of a massive air assault that began just before midnight and lasted until 5:15am. A total of 1,136 sorties dropped 5,268 tonnes of bombs up and down the coast of Normandy in order to make it safer for the invasion fleet to land at sunrise.

With next to no resistance from the German Luftwaffe (air force), only two aircraft were lost that night – Murray’s was one of them. Halifax “MP-W” was hit by flak and crashed inland between the villages Grey-sur-Mer and Vers-sur-Mer. He and his crewmates were quickly buried in an orchard by local citizens – a brave act as it was forbidden under occupation law. Being Canadian, Murray was eventually reburied at Beny-sur-Mer while his English crew mates were reburied in a British cemetery.

As Murray and his crew were flying overhead, Jones was onboard ship in the English Channel, approaching the Normandy coast. He was one of three Jones brothers serving in the forces.

His older brother Richard was in the RCAF and their younger brother Ross was with the army. Brothers Allan and David and their sister Merle were still at home at 164 Lawlor Ave. Cameron attended St. John’s school and matriculated from Malvern collegiate in 1940. He was a member of the Argonaut Rowing Club and St. John’s Roman Catholic parish and had a job as an order clerk at Robertson Brothers Chocolate Factory on Queen Street East. His father, also named Leander, fought in the First World War.

Jones arrived in England in 1943 to begin special training in a Combined Operations radio network, an innovation designed to improve communication among units of the invasion force. As the driver in a Contact Detachment, comprised of one officer, a corporal (Jones) and two radio operators in a jeep, their task was to keep track of battalion movements and relay that information to commanders directing the breakout from the invasion beaches.

Jones had learned how to operate radios on his own initiative back in Toronto and earned compliments on his service file as being of “superior intelligence and learning ability”. His recruiting officers noted he was “very alert and stable, well built and of neat appearance, good at math and with a mechanical aptitude”.

Within the year, Jones was assigned to the 7th Canadian Reconnaissance Regiment slated to take part in the landings on June 5, the original date for the invasion. After a weather delay, General Dwight Eisenhower famously gave the go-ahead for June 6 and Jones was among the second wave to reach the beaches later that day. As the Allied armies fought their way inland in what became known as the difficult Battle of Normandy, Jones was killed on July 9 not far from the airfield at Carpiquet, which had been captured in a fierce battle just four days earlier.

Like Murray, he was buried nearby until the special unit tasked with finding fallen soldiers and concentrating their graves in larger, permanent cemeteries exhumed his body in 1946 and brought it to Beny-sur-Mer. He is buried just nine rows away from Murray.

Also buried in Beny-sur-Mer is Corporal Howard P. Kidd, (Malvern Class of 1922) a corporal in the Highland Light Infantry, which was among the units to go ashore on June 6. He survived the landings only to be killed in action on July 8, 1944. He too was re-moved from his original grave in 1946 to join his fellow Malvern alumni at rest in the country they helped liberate.

Although the number of men described in this story is small, there are many more local men who took part in what was the greatest invasion in human history. If you know of anyone with a D-Day story, I’d love to hear it (or any other war story, for that matter). Please contact me at david_fuller@live.ca.