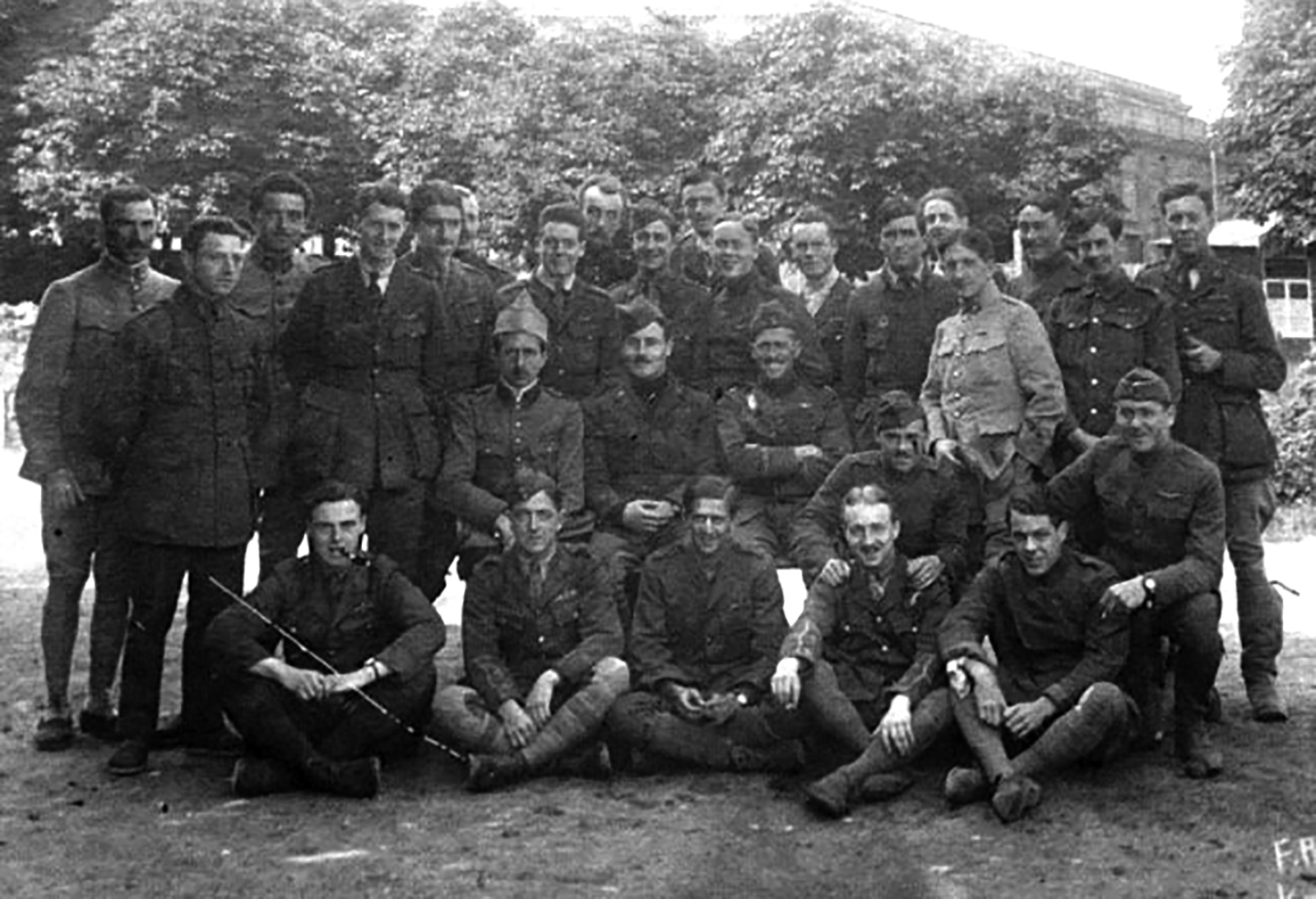 Prisoners at Danholm-Stralsund internment camp on the Baltic Sea in 1918. John Zieman, who lived near Main and Gerrard streets, and his observer, 2nd Lt. H. Tannenbaum, are among them, possibly the two men at the end of the back row. Photo: Mary Moore, granddaughter of John Zieman.

Canadians will mark the 100th anniversary of the end of the First World War on Nov. 11 of this year, much as they have in past years: with solemn ceremonies, poppies and moments of silence for the fallen.

But it’s important to remember that Nov. 11, 1918 was also a joyous occasion for those who had suffered four years of hardship and loss. People were ecstatic when they heard the Armistice was signed and the men would be coming home, but few realized what “coming home” would really be like. For many soldiers, including those below who volunteered in 1914-1918, the return would be postponed for months through to the spring of 1919 and it would be to a country that had changed greatly.

Historian Tim Cook, in his latest book, The Secret History of Soldiers: How Canadians Survived the Great War, writes about a shared culture that helped soldiers cope with the constant threat of death in the most devastating war in history. He also notes that the soldiers’ culture, with its black humour and irreverent, incomprehensible language, was something that alienated them from society for a time and left them with a sense of loss of the special bond they had with each other “over there”. They were changed. For the 129 men and one woman of Malvern Collegiate who served between 1914 and 1919 and survived, the Armistice meant going home, but also living with what the war had done to them, both physically and mentally.

Gunner George Ames, who lived at 687 Kingston Road, suffered serious wounds to his right thigh from shrapnel just nine days before the guns went silent at 11 a.m. on Nov. 11. They were guns he had been firing while serving in the artillery near Valenciennes. Ames’ service didn’t end until 1920 and his release from a convalescent hospital. A successful businessman before the war, he gave it up to farm, but the wounds never healed completely, and he died from them in 1933.

Lieutenants Walter Carveth of Birchcliff and John Zieman, 146 Main Street (now Cool Runnings restaurant), were both pilots in the Royal Air Force who ended the war in German prison camps after being shot down six weeks apart in the summer of 1918. While life as a captured airman could be somewhat civilized by war standards, it still meant captivity and separation from comrades and family for months or longer.

For Private Thomas Dewdney, captured at Ypres in 1916, it was two years before he could even look forward to going home. His brother Robert had come home in February 1918, after months in English hospitals recovering from wounds received at Vimy.

Carveth’s sister, Bertha, who was serving as a nurse at a Canadian war hospital, worried along with her family after he went missing, until the Red Cross reported that he had been captured. Zieman’s family also went through an anxious time after hearing he had been shot down, until his capture was also confirmed. Many families held out hope that their missing son had been made a prisoner and not killed. The family of Dr. Opie Sisley, who lived in the big house on the northwest corner of Main and Kingston road, clung to that hope for many months after they heard their son “Bud”, a fighter pilot with 70 Squadron, had gone down in his brand new Sopwith Camel in 1917. It wasn’t until the following year and after numerous hopeful enquiries for information, that the RAF finally recommended he be officially “presumed dead”. The family received some of his personal belongings from the Germans months after the war ended, a further reminder of his fate. The oldest Sisley brother, “Max”, flew with the air force for almost a year before he was sent to a convalescent hospital for officers, recovering from what we now call PTSD.

John Zieman’s brother, Dick, spent Armistice day 1918 in a hospital on the French coast after being gassed on Nov. 8/9, just days before the war ended. He was serving as a Private with the 4th Canadian Mounted Rifles, who had just successfully assaulted the Canal de l’Escaut and were heading to the rear to await the Armistice, when enemy shells came down on him and several others. Dick, who had lied about his age to enlist at 16, returned home eventually but suffered from poor health the rest of his life and died in 1955 at age 55.

For Cook, the core question about the shared experience of soldiers at war is, “how did they survive? How did they cope, how did they endure… why didn’t they all break down?”

He sees an answer in the things soldiers shared: songs, jokes, stories, theatrical performances and sports. These activities serve as what he calls a “shield” against the brutality of war that helped maintain the men’s will to fight and accept the dangers they faced together in a war they all believed was a just one. “I think you begin to see the development here of, quite obviously, a different culture – different from civilian life, a culture that is helping them band together…and…a culture that, I think, tells us something about a new Canadian culture…and Canadian identity.”

Cook also wrote his book to help people today understand the significance of what that generation went through.

“There’s this tremendous number of Canadians who have a family connection to the First World War, which shouldn’t surprise us,” he said. “If 635,000 served and 66,000 were killed, that leaves about 540,000, and so there are literally millions of Canadians who have a link to the war. And I meet them everywhere and they want to know more about their great-grandfather or possibly a great-grandmother as a nurse… so I hope that this book is one of those things that helps to reach out and really humanize this generation.”

Of course, many Malvern men did not return, and 25 of them are remembered on the memorial at Malvern.

— David Fuller is a writer and member of the Malvern Red and Black Society and the Central Ontario Branch – Western Front Association (cobwfa.ca). He will be speaking about the First Armistice Day and the end of the Great War in Toronto at the Nov. 6 meeting of the Beach & East Toronto Historical Society, 7 p.m., in the Beaches Library.