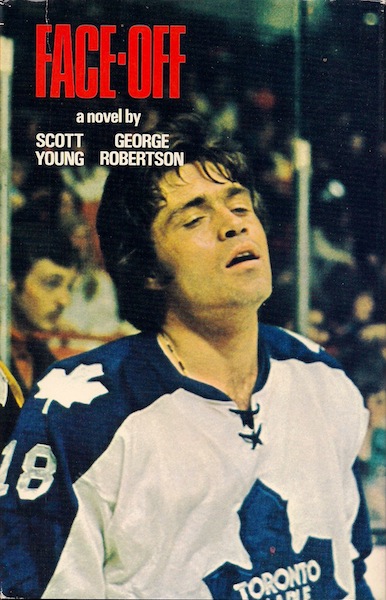 Has there ever been a more anticipated hockey season for long-suffering Leaf fans? Dare we dream?

It’s been over half a century since Toronto last held a Stanley Cup parade. Who remembers Bobby Baun scoring with a broken leg? I have fond memories of those long ago Saturday nights, the last strains of the Hockey Night in Canada theme music playing as I tumbled half-asleep into bed.

There’s a new hotshot player in town to lead the Leafs back from the wilderness. Auston Matthews? John Tavares? No, it’s Billy Duke, played by Art Hingle, and the year is 1971 and Face-Off is the first Canadian film to have a million dollar budget.

The 1960s were a time of protest, flower children and folk music in Yorkville. Neil Young was playing clubs like the Riverboat and Joni Mitchell’s man was “betting on the Maple Leafs.” Why not? The Leafs won four Stanley Cups, but now their glory days were fading. The late, great Johnny Bower retired in 1970, but George Armstrong and Dave Keon carried the torch.

Johnny F. Bassett had an idea for a movie, a Romeo- and-Juliet type of love story set in the very different worlds of hockey and music. A rookie from the sticks comes to the big, bad city and falls for a troubled singer (Trudy Young). The whole Leaf team and NHL legends like Bobby Orr would be part of the filming.

There was only one problem for the lead actor Art Hindle. As he later recalled, “I think I was the only Canadian kid of my era who didn’t play hockey and who couldn’t skate.”

When Hindle was young his father brought him to a rink, but his feet froze so they took up sailing at Ashbridge’s Bay Yacht Club instead. Hindle was lucky that the Face-Off hockey scenes were filmed last. After two months of practice he could skate well enough that Paul Henderson asked how he “got so good” in that short time.

Leaf Jim McKenny was Hindle’s stand-in during action scenes. Hindle has said he got the role because he looked like McKenny.

Art Hindle grew up in the Beach Hill area on Eastwood Road and later on Courcelette Avenue.

Hindle was a free-spirited teen who spent a lot of time hitchhiking across North America. He attended Riverdale C.I. and Malvern C.I., but left after Grade 11. He was a father at 19 and became a successful stockbroker, but wasn’t happy. He did some modelling, but really wanted to be an actor like his uncle.

Face-Off was only his second film. In 1974 Hindle left for Hollywood where his many credits include Invasion of the Body Snatchers and the TV series Dallas. He was back in Canada for Black Christmas (with scenes at Centre 55), Porky’s and the TV series E.N.G. for which he won a Gemini Award.

These days Art Hindle lives on a horse farm in King Township, still busy with his long career as well as advocating for the film industry and arts funding while working with the actors’ union, ACTRA.

Face-Off was labelled the Canuck version of Love Story, a hit film and book about a hockey player and a doomed love. Hindle calls the film “a perfect time capsule of Toronto and the Maple Leafs in the early ’70s.”

These days Face-Off is remembered for the hockey action more than the hokey plot. We do see a Toronto that only lives in our memories, a city before the CN Tower and condos and a ritzy Yorkville.

I hope to be around for another Stanley Cup parade. Royson James recently wrote in the Star: “But only dead or dying Leaf hockey fans saw the league’s best play for the home side.” Does he know something I don’t know? Should I see my doctor? Hey, I’m still standing and I’m not leaving till the Leafs win again. Go Leafs go!