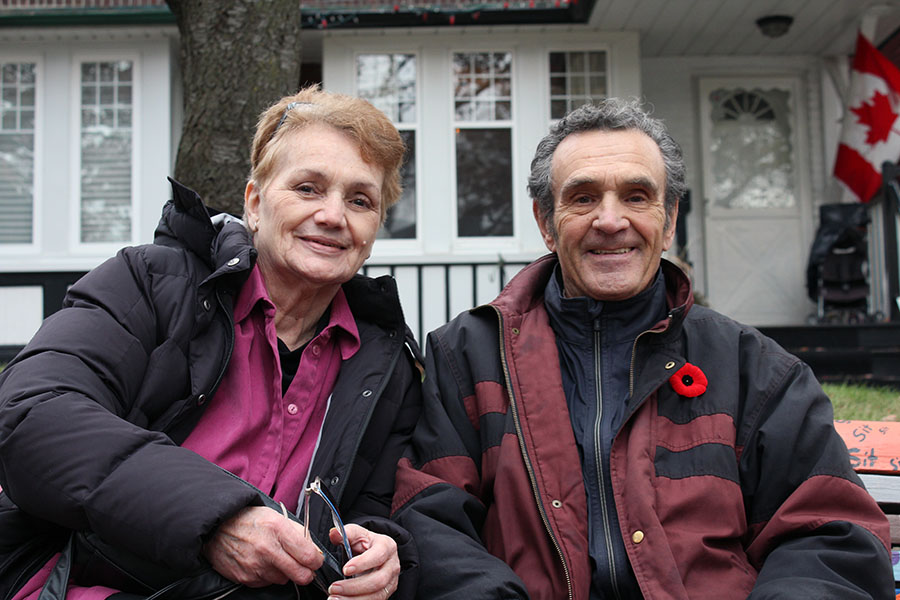 Patricia and Gene Domagala. The city is going to name an Upper Beach laneway after Gene next year. PHOTO: Josh Sherman

An Upper Beach laneway is going to be named after long-time local volunteer and Beach Metro columnist Gene Domagala.

In November, East York Community Council approved an item that proposed the naming of a laneway that runs north of Swanwick Avenue from Enderby to Norwood Roads.

Community Centre 55 spearheaded the push this summer to have the laneway named Gene Domagala Laneway.

A petition was circulated and the support from a majority of residents living in homes backing onto the laneway was required before community council could vote on the matter.

Debbie Visconti, executive director of the centre, said she petitioned for the laneway naming because of Domagala’s active role in the community over many years.

“Gene is such an integral part of Centre 55. He’s been on the board here, he does a ton of volunteer work for us,” she said.

Domagala, she said, was at first reluctant to accept the honour, but Visconti needed his signature to move forward. “He didn’t want it. So one day he needed something from me… and I said until you sign this form, you’re not getting this.” He acquiesced.

“They’ve been bugging me on this for the last year,” said Domagala, who has been volunteering for half a century and had tried to get a laneway named after the late journalist and Beacher Glenn Cochrane.

He credited his wife, Patricia, for her support. “Without my wife… I wouldn’t be able to go out and do whatever the hell I’m doing,” he said.

Ward 32 Counc. Mary-Margaret McMahon, who estimates 10 laneways have been named in her ward during her tenure, was also behind the decision and called Domagala “the Mayor of the Beach.”

“We’ve always wanted to name a lane after Gene Domagala,” she said. “He does everything in the Beach and has for years.”

McMahon also noted how laneway naming has benefits for first responders and others. “It’s really important for EMS and emergency services and police to have the laneways named. It helps with finding locations in a timely manner,” McMahon explained.

According to the city, 10 laneways have been named after living persons since December 2013. “Prior to December 2013, namings in honour of living persons required City Council make an exception to the street naming policy,” read an email statement from city spokesperson Cheryl San Juan.

About 400 of Toronto’s approximately 2,400 laneways are named, and 21 have been named this year. Five honoured living individuals.

The city said it usually takes eight to 10 weeks before a sign is installed after a laneway renaming. Visconti said there are plans to host a sign unveiling in April.

Well deserved! Gene is a gem who works tirelessly for the community.

Ya think Community 55 would have done something for the late Glenn Cochrane who served on their board for almost 10 years.

Domagala deserves to be bronzed as a statue for all the service he has given, not just a name on laneway to nowhere.

Very well deserved. In fact Gene is deserving of a having a major street named after him.

What a fantastic and we’ll deserved legacy for Gene Gene the volunteer machine! The Beach is a better place for all your good deeds and volunteering. Congrats!

I have worked with volunteers for over 40 years and have come across thousands of them. In addition I chaired a Provincial Committee who made recommendations to the Lieutenant Governor of Ontario, an annual and limited list of people deserving to be recognized for their work and who were consequently awarded one of the two highest Provincial Honours. Having that experience of such scope and complexity, and having the honour of knowing and working with Gene for about 35 years, I can attest to the fact that Gene Domagala is an anomaly and an extremely rare breed of altruism. I somewhat agree with Ira’s comment. I would have a bronze statue of Gene memorialized in Kew Gardens :).
I wish to note as well, that his mention of the late and great Glenn Cochrane and the fact that Gene credits own wife with his successes and compassion, speaks volumes about him.

Congratulations Gene, a richly deserved honour for you. Having served alongside Gene for many years on the Board of Community Centre 55, this tribute is long overdue. His is a tireless volunteer, community leader, and advocate for the Beach and those that live and work in our beloved neighbourhood.