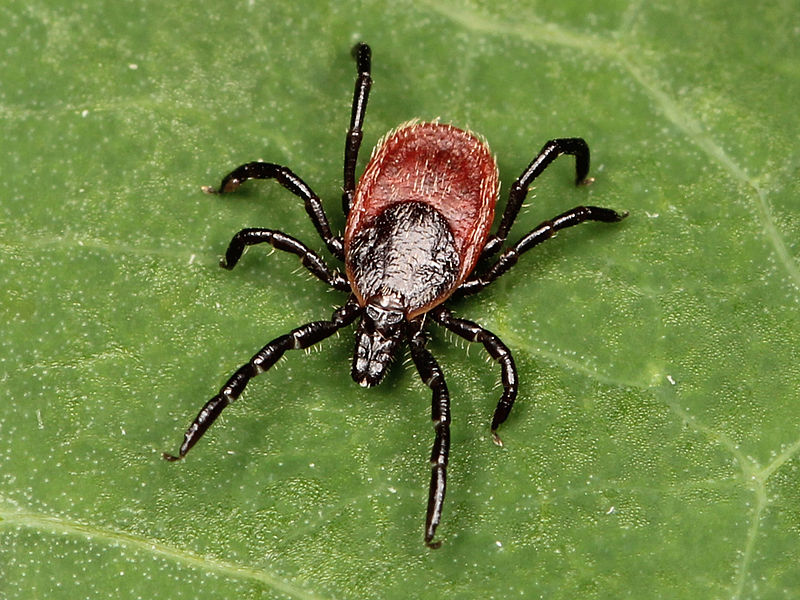 The black-legged or deer tick can carry and transmit Lyme disease to human or animal hosts. Photo: Ryan Kaldari/Wikimedia Commons

It was not that long ago that for vets and physicians in Toronto, tick-borne disease was really only a concern for our colleagues in certain parts of the US. In recent years, however, this has changed dramatically. The combination of a rapidly growing tick population in southern Ontario and the mild temperatures we are experiencing this winter make the year ahead very concerning for both pets and people at risk of exposure to ticks.

Most types of ticks require three different hosts in their lifespan. Ticks lay eggs in secluded areas with dense vegetation. These eggs hatch into a larval-stage tick, which will search for its first host and blood meal, usually a bird or rodent. It is by hitchhiking on migratory birds that ticks have expanded their territory into our area.

After this first meal, the larva develops into the nymph stage. Nymphs remain inactive during the winter and emerge again in the spring to find another host, this time usually a rodent, pet or person. After this stage the nymph develops into an adult, which will typically look for its third and final host in the fall, also usually a rodent, pet or person.

When ticks need to feed they will make their way to the end of a blade of grass and dangle there waiting for a potential host to brush past. Ticks are very slow moving and take time to find a spot to attach and feed. On pets, ticks most commonly attach around the head, ears, neck and feet, but they can attach anywhere on the body. The real concern is not the ticks themselves, but the diseases they can carry.

Different species of tick can carry different diseases, with the most talked about being the black legged tick and the bacterial disease it can carry: Lyme disease.

Many tick-borne diseases produce vague symptoms that can be associated with many other more common illnesses, which has made early diagnosis and treatment, especially in areas where the problem is new or emerging, a real challenge. The most common signs of Lyme disease in pets and people are fever, lethargy, joint pain and stiffness.

People – but not pets – infected with Lyme disease will also often develop a target-shaped rash around the bite. People are more likely to develop clinical signs of infection than dogs and usually develop them within a few weeks. In dogs, only about 5 per cent of infected individuals ever actually show signs of illness, which may not show up until months after infection.

Because it takes 24 hours for the bacteria to leave the tick and infect the host, the best possible way to prevent tick-borne is early inspection and removal. An unattached tick can be combed out easily; more care should be taken removing an embedded tick.

Generally we recommend applying a dab of rubbing alcohol to the body of the tick and then using either fine tweezers or a special tick-removal lever to apply a continuous gentle pull from the part of the tick closest to the skin. Avoid jerking movements, which are more likely to break the ticks and leave the mouthparts imbedded in the skin. Also avoid squeezing the body of the tick, as this can accelerate transmission of bacteria. Place the tick in alcohol to be sure it is dead before disposal.

In some areas it is common practice for people to inspect themselves and their pets regularly for ticks, especially after walking in high-risk areas. In addition to careful inspection and removal, all dogs should be on some sort of tick deterrent.

Ticks do not die over winter, they just become dormant, waiting for the temperature to reach 4°C. They will emerge to feed as soon as this temperature is reached, even if only for a day or two. Unlike other parasites with a more clearly defined season, ticks can literally be a threat year-round when we have unusually warm winter days, such as we have experienced often this winter.

There is no known effective environmental control for ticks in the wild, so once a population is established, it is there to stay and over time will likely get worse.

Most veterinarians strongly encourage all dog owners to have their pets screened for tick-borne disease yearly, often in combination with the long-standing practice of screening for heartworm disease.

Public Health Ontario reported that confirmed cases of Lyme disease in humans in the province more than doubled in 2015 from the previous year. For more on ticks and their emergence in specific areas, visit the Ontario Ministry of Health website at www.health.gov.on.ca.

Lyme and other tick-borne diseases are serious and growing threats to us all. I urge everyone, pet owner or not, to educate themselves on this rapidly growing problem and take all necessary precautions to avoid these pests and the debilitating illnesses they can carry.

Dr. Nigel Skinner is a veterinarian in the Beach ~ kewbeachvets.com