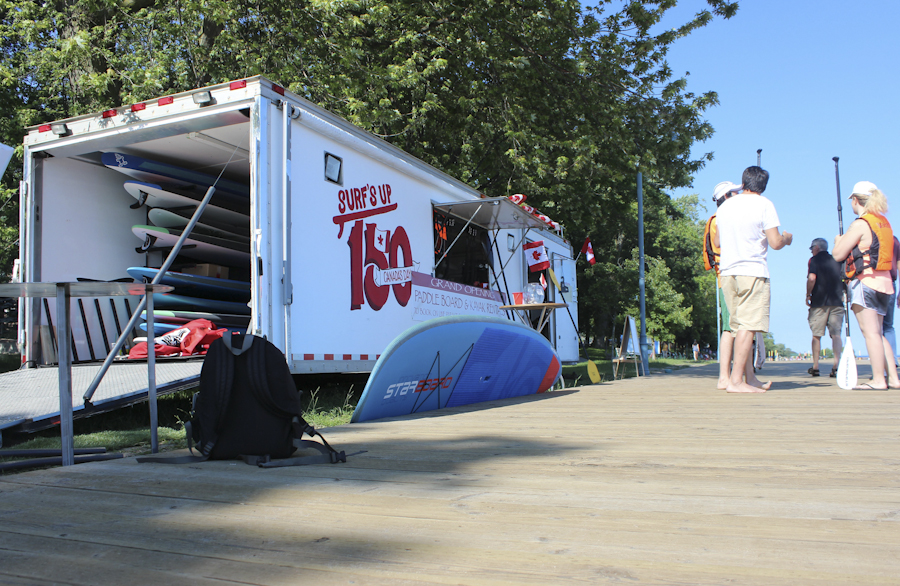 The location of a new business on the beach is leaving some residents unable to see beyond the box.

iPaddle Adventures provides stand up paddleboard and kayak rentals along with paddleboard lessons. The two-man operation opened last month in the small park beside the boardwalk near Balsam Avenue and Hubbard Boulevard. The business, which is run out of a trailer, is the latest in an effort by the city to open up the eastern beaches to a limited number of new beach-appropriate enterprises.

“I’m supportive of animating our beachfront, always have been, and I heard that loudly and clearly when I door knocked… ‘Why can’t we get a beach umbrella, or paddleboard rental,’” said ward 32 councillor Mary-Margaret McMahon.

In total, there are three recreational kiosks that received permits through the city’s tender process following a request for proposals this spring. They include a second paddleboard rental kiosk located by the Kew Beach tennis courts, and a bicycle rental kiosk further west.

But some people aren’t happy with the placement of the paddleboard rental shop near Hubbard, and believe it should be placed west near Ashbridges Bay or in a more appropriate location.

“We really don’t want it. We already have three pages of people that don’t want it,” said Indra Seja, a local resident who is circulating a petition and says her view has been blocked by the business. “This guy is making a profit at the expense of our view.”

Jason MacDonald, co-owner of iPaddle Adventures, said that while he did not choose the exact location of the business, he does understand the concerns being voiced by the community.

“I can understand their concerns, we did wreck their view,” he said. “But it happens, unfortunately.”

McMahon said that this year’s high water levels played a role in the placement of the trailer in the park.

“It’s my understanding that they were to be down on the sand but because of the high water they had to move up to the park space,” she said. “They might move back to the sand next year.”

MacDonald’s business partner, Brian Quin said that the people who are unhappy are not indicative of the response they have received from the community as a whole.

“We have received enormous positive response to what we’re doing, and we’re really over the moon,” he said. “There’s really just a handful of these people that are opposing us and that will show itself at the end of the day when you see how many people are renting our equipment.”

Seja and other Hubbard and Balsam residents are unhappy with the city and the councillor’s response to their concerns about the added activity in the park, noting that the area is already “an eyesore” due to a temporary Toronto Hydro construction staging area that was erected earlier this year.

One resident, Stephen Bracegirdle, said that he would be going to the tax department at city hall to ask for a refund on some of his property taxes.