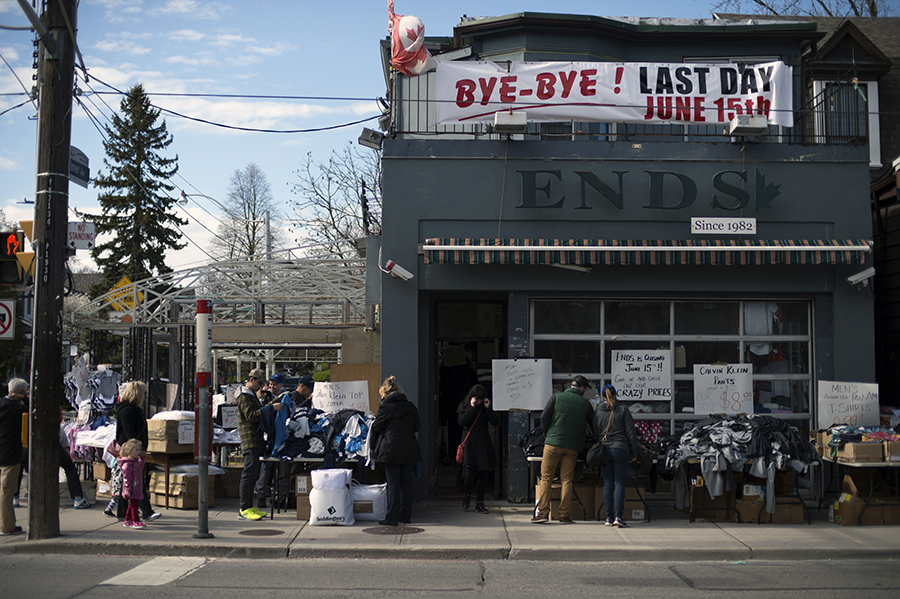 T-shirts, dress pants, and dish towels are just a few of the piles passersby can sort through at Ends ahead of its June 15 closure. PHOTO: Anna Killen

After 35 years an iconic Beach retailer is getting ready to bid the neighbourhood adieu.

The longtime owner of Ends – the overflowing discount store at the corner of Queen and Elmer – said after running his business for more than three decades, he’s ready to move on to the next phase of his life.

“I’m 73,” said Harold Weisfeld, the businessman and artist who goes by Zoltz, reached by phone earlier this month.

“I had a great run but it’s [hard] you know. Online, Amazon – everything is changing,” he said, noting that “the traffic pattern isn’t there and I’m tired.”

Zoltz said he is an artist at heart, and is going to take time for his creative practice, as well as spend time with his wife.

But the decision to retire wasn’t an easy one – the store has been a large part of his identity, he said.

That surplus of merchandise is one of the reasons some may have noticed large signs advertising “crazy prices.”

With a tentative June 15 closing date, Zoltz is eager to get rid of the merchandise in the store.

He’s less eager to leave the customers who frequented the Queen Street East location throughout the years.

As for the rumours of another condo development that have, inevitably, been swirling around the neighbourhood with news of the closure, Zoltz said that he “sold the buildings [but] what’s going in I don’t know. I don’t think condos. I think they’re going to fix it up and rent the stores and put different things in there but I’m pretty sure not condos at the moment,” he said.

He is also closing the store’s Avenue Road location, but said he is not selling that building as he and his wife live above it.

“… what’s going in I don’t know. I don’t think condos. I think they’re going to fix it up and rent the stores and put different things in there but I’m pretty sure not condos at the moment”

LOL. No, not if by “at the moment” he means before 4 p.m. Friday. That corner SCREAM condos. Let’s just hope they’re a little more attractive than many others.