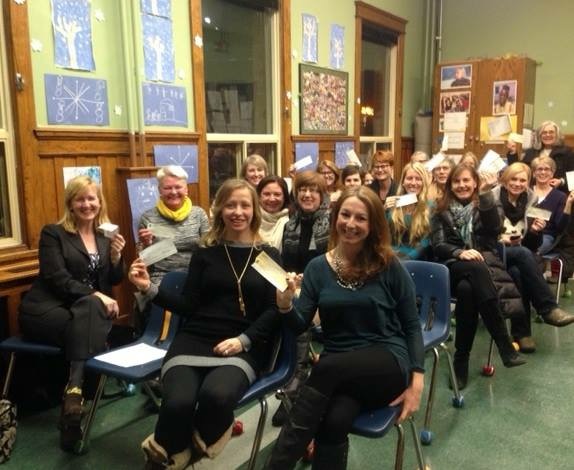 The women of 100 Women Who Care Toronto East proudly hold up their donation cheques during a recent meeting. PHOTO: Submitted

For Wendy Breau, having a desire to help those in need was never a question. How to go about doing so with a tight schedule, however, was.

It’s a problem that plagues many – wanting to help people who are less fortunate, but lacking the time or the resources to do so. But Breau wasn’t about to let those roadblocks deter her. Instead, she took the time to research different avenues that would allow her to give back without impeding on her day-to-day life.

That’s when she discovered 100 Women Who Care.

“I read about the 100 Women Who Care movement online somewhere back in 2012,” said Breau. “And discovered that there was…at the time what was called the Toronto chapter. So I signed up for that and went to a couple meetings.”

The concept of 100 Women is simple – volunteers donate $100 per meeting and attend four meetings per year, each lasting one hour or less. During that hour, the women vote for the organization they feel most deserves the money that quarter. Once they have reached a consensus, 100 per cent of the donations are sent directly to the local charity.

As much as Breau enjoyed the Toronto chapter, she said she found it difficult to attend the meetings because they were located in Rosedale – an inconvenient location given her home in the Beach.

“As I sat in the meeting I thought, you know, I live out in the Beaches. Our community should be the type that could support its own chapter and so I talked to the founder of Toronto and she wasn’t fussed about me starting my own chapter in the East End, so I decided to start the chapter,” said Breau.

It was 2013 when she took the leap to start the chapter with two friends and although the membership now includes approximately 40 women, Breau said she’s been a bit surprised to see how long it’s taken to build the movement in the East End because she thought “there would be a lot of women who would be interested in an organization that doesn’t take a ton of time, that doesn’t require going out and selling anything or buying tables at events. All those sort of standard things that most fundraising and most charitable involvement ends up taking your time away for.”

Breau and her partners are aiming to get 100 women on board. In the meantime, she’s focusing on continuing to harness a positive atmosphere for the current members who can take solace in knowing that even in the span of one hour, they’ve made a large difference in the community.

The nominations for charities that receive the funds have been widespread, said Breau.

“Nominations have been all kinds. We have tended to wind up fairly heavily on the homeless shelters, women’s shelters. Our November choice was the Glow Project at New Circles. It’s a special clothing bank that people are referred to by the social service agencies and once referred they actually get to go shop the clothing bank, I think it’s twice a year, and depending on their circumstances they’re given a certain allowance at the clothing bank,” she explained.

“And before that we did Reach Out and Read at St. Michael’s Hospital. It’s trying to bring in charities that people have a connection to, or that they’re aware of, they volunteer with,” she continued.

To ensure the money is, in fact, going to the charity and project of their choice, during each meeting 100 Women brings in a representative from the previous quarter’s charity to talk about how the money was used.

“One of our requirements of a charity for receiving our funds is our funds are put towards a particular project. They are not used for administrative costs or overhead,” explained Breau.

“So Reach Out and Read is using it to buy books, a couple of the shelters have used it to buy new bedding. So we know our money is actually going and doing good.”

In addition to having representatives from the charities, Breau said the group also hosts interesting female speakers.

In the past, guests have included Carolyn Taylor from the Baroness Von Sketch show, who spoke about being a woman in comedy and television writing.

Other guest speakers have included an Olympic athlete, a chiropractor, and a mindfulness expert who used a piece of chocolate to teach the women how to become mindful.

For those who would like to get involved, Breau said “there are two easy ways to get involved – one is they can email us or we actually have a Facebook page and people can reach out through the Facebook page,” she said, also noting “we welcome everybody … we’re happy to have people come try out a meeting and see if it’s for them.”

Our next meeting is Tuesday, February 28 at The Globe Bistro (Danforth & Broadview) – registration at 7:15PM, meeting starts at 7:30PM.

I would like to join – I can attend Feb 28th meeting at Globe Rest. Do you wish chq mailed in advance; do I register in advance or hold til Feb 28th.
I applaud the groups excellent work and look forward to joining your worthy cause
Thank you, Andrea Teele