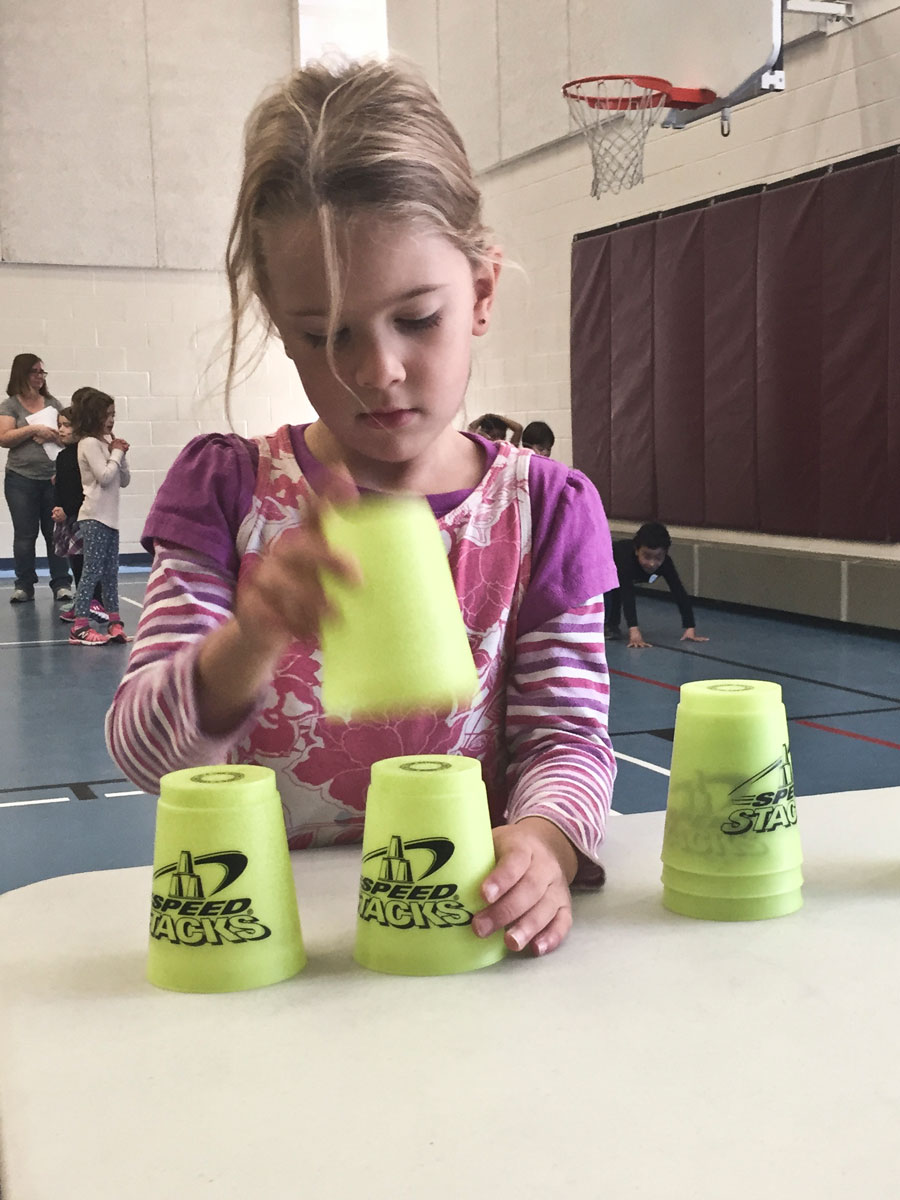 Vivian Van Huyse concentrates as she stacks her cups during the sport stacking competition at Kimberley P.S.

The school gym was ripe with anticipation on November 17 as students from Kimberley Public School prepared to work together to compete in the annual world sport stacking event. The goal: to be part of a new Guinness World Record for the most people sport stacking at multiple locations in one day.

What’s sport stacking, you ask? It’s a game that involves racing and stacking cups in a pattern. Students are split into teams to take turns racing to the cups and stacking them up as many times as they can in a short period of time.

Popular at schools all over the world, sport stacking is a game that promotes teamwork through the use of a relay format, and develops physical skills for children including hand-eye coordination, focus and speed. Children cheer each other on as they work as a team to achieve the fastest time as well as having the largest number of stackers.

“It was a really fun day, for sure,” said Bev Mummery, a teacher at Kimberley P.S. who organized the event. Mummery first heard about sport stacking at an Ophea conference six years ago – Ophea is a not-for-profit organization focused on championing health and active living in schools and communities – and has been organizing the school-wide event ever since.

Kimberley P.S. is one of hundreds of schools that take part in this event, with countries from New Zealand to South Africa to Iceland participating on the same day. This year marked the sixth annual sport stacking competition at the Upper Beach alternative school.

Last year’s event saw 618, 394 students come out to participate – the Guinness World Record – while this year the goal was to reach or exceed 625,000 to maintain and boost that record.

Canada is one of the countries with the largest number of participants, sitting at nearly 38,000 students taking part.

Cheers could be heard from well down the hallway as the children raced to their cups, ready to take on the challenge of being a part of a new world record.

As hands flew wildly around, cups moving one on top of the next, the students knew each move meant they were one step closer to that new title.

“From our school we had 276 [participants],” Mummery said. “Actually there aren’t too many schools in Toronto that take part yet. It’s starting to grow but we need more schools to take part.”

Unfortunately, the schools didn’t quite reach the Guinness World Record goal this year, ending with a total of 578, 740 participants worldwide.

But the silver lining? There’s always next year.