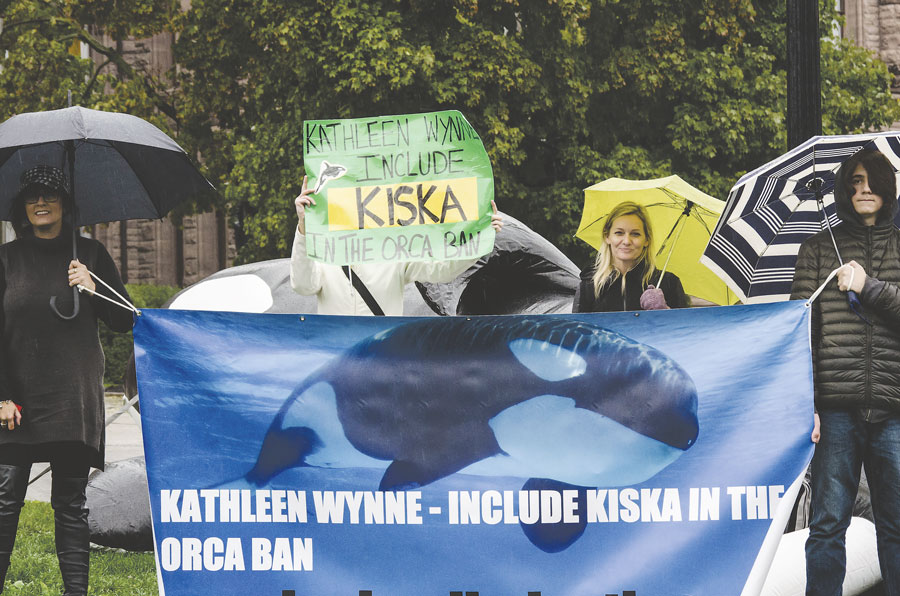 Members of the Ontario Captive Animal Watch and the Whale Sanctuary Project stand in front of Queen's Park during a peaceful demonstration to urge the government to reconsider a grandfather clause in Bill 80. PHOTO: Lara O'Keefe

The rain poured down on October 21 as a small group of activists, led by Beach resident and president of the Ontario Captive Animal Watch Carly Ferguson, gathered in front of Queen’s Park.

The purpose of the demonstration that day was to peacefully urge Ontario premier Kathleen Wynne to reconsider a clause in Bill 80 that prohibits Kiska, the lone orca at Marineland, from swimming free.

“Our goal is to see [Kiska] finally out of Marineland and in a seaside sanctuary where she can feel the ocean again and she can at least communicate with her own species through vocals and see her species,” Ferguson said.

It’s been one year since the bill, which banned the possession or breeding of an orca in Ontario, was passed by Wynne and the Liberal government.

While this was considered a win by animal rights activists on many levels, Ferguson said they quickly realized the bill included a grandfather clause that would keep Kiska the orca in her tank at Marineland.

That clause states that “a person may continue to possess an orca in Ontario if they possessed it prior to March 22, 2015.”

Brent Ross, a spokesperson with the Ministry of Community Safety and Correctional Services explained that the decision to keep Kiska at Marineland was “based on the information received during our consultations,” he said. “The ministry determined that moving Kiska to another facility could be detrimental to her health and well-being, given that the whale is at an advanced age, it has a long-standing familiarity with its environment at Marineland, and the familiarity of the staff that have cared for the whale over the years.”

Now approximately 40 years old, Kiska was captured from Iceland as a calf and has been in the possession of Marineland ever since.

According to Ross, “Kiska remains the property of Marineland and they ultimately make the determination whether Kiska should remain in Ontario, be relocated to another facility or whether she is a candidate for a wild release program.”

Marineland has been under intense scrutiny by animal activists for a number of years due to their alleged mistreatment of animals at their facility but when asked about the health of Kiska, said she is “happy and healthy.”

At the rally, Ferguson explained that presently, their “focus is on the government because we feel that through improving our laws, that’s how these animals are going to benefit the most.”

And while Ross said “there are currently no immediate plans to amend Regulation 60/09,” Ferguson’s group is demanding a change to the bill, and came armed with an option they feel would be ideal for Kiska.

Kathryn Sussman, a Beach resident and advisor with the Whale Sanctuary Project, spoke at the demonstration about the project which aims to offer cold water dolphins, orcas and belugas a seaside sanctuary where they “would be able to live out the remainder of their days in a more natural oceanic environment,” she said.

The team is currently reviewing options for the sanctuary, which they envision to be on either the east or west coast of North America.

The Whale Sanctuary Project is comprised of a team of whale researchers, neuroscientists and veterinarians from all over the world and will “be nothing like captivity,” said Sussman. “They will not be bred in any way, they will not be performing in any way. There will be no invasive research, so it will differ very much from any kind of zoo or theme park facility.”

Despite small odds, Ferguson and her team remain hopeful they’ll be able to convince the government that there are other, more positive options for Kiska. The Whale Sanctuary Project being one of them.

“They foresee it as being a beautiful option for somebody like Kiska,” said Sussman.

That is nowhere near an “advanced age” they live as long as humans.