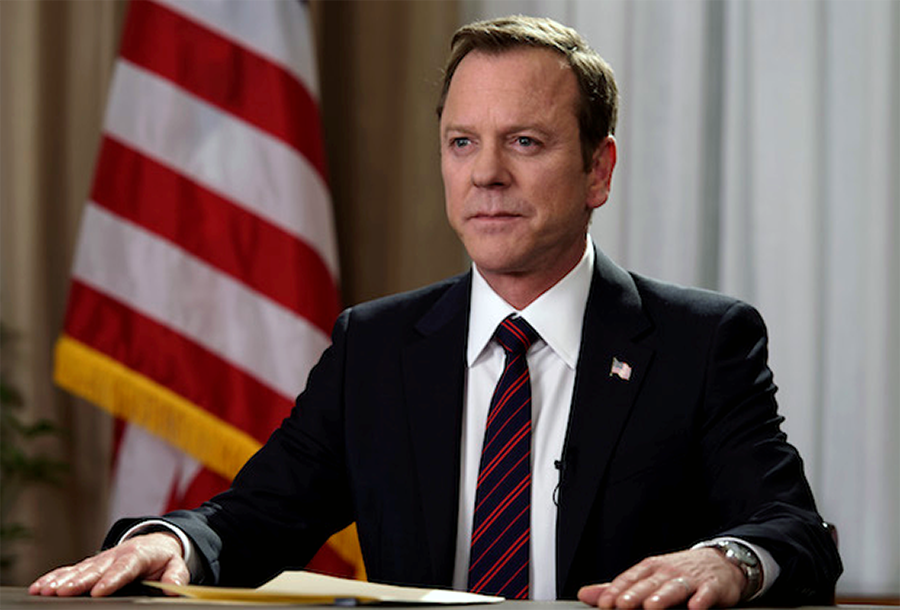 On ‘Designated Survivor’, Kiefer Sutherland plays a low-level cabinet minister who gets the call of his life. PHOTO: Handout

Next month, American voters will go to the polls to elect a president. A new made-in-Toronto TV series poses the question: What if a low-level cabinet member suddenly became president after a catastrophic terrorist attack? Kiefer Sutherland is the Designated Survivor (Wed. 10 p.m. on CTV).

Where is Jack Bauer (24) when he’s really needed? Sutherland is back, but not as an action hero. He plays a mild-mannered everyman thrust into the Oval Office by tragedy and circumstance: “Sir, you are now the President of the United States.”

The first time I saw a teenaged Sutherland he did not seem like presidential material. He was playing a disturbed young man running around the stage quite naked. I can’t for the life of me remember anything else about the play.

Sutherland has acting and politics in his blood, but he is not eligible to be an American president. He’s still a self-described proud Canadian, born in 1966 in London, England to famous actor parents Donald Sutherland and Shirley Douglas.

His mother is the fiercely activist daughter of politician Tommy Douglas who was voted “The Greatest Canadian” for founding our system of universal health care, “something that my family is incredibly proud of,” Kiefer told E News.

After years in Hollywood and a 1970 divorce, Douglas brought her three children home to Toronto where the family lived modestly for eight years in a Crescent Town high-rise overlooking Dentonia Park. When young Kiefer was playing hockey, he could hear his mom Shirley yelling down from 13 stories above for him to wear a helmet. Sutherland has said that the only person he is “scared of” is his mother.

Sutherland told the New York Times that when he and his twin sister Rachel were children they would visit their “grandpa” Tommy Douglas in Parliament at Ottawa and Kiefer “loved the debates.”

Kiefer went to Crescent Town Elementary School and at least five high schools, never staying very long. While meeting a new set of friends every year he became a class clown to make them laugh. He wasn’t much interested in school and skipped classes at Malvern C. I. to shoot pool at the Silver Cue on the Danforth. (Does anyone remember him at M.C.I.?)

Sutherland was a school dropout by 16. In 1984, he got his big acting break in the film The Bay Boy with love interest Leah Pinsent (now a Beach resident). He would go on to bad boy fame in movies like Stand By Me (1986), The Lost Boys (1987) and Flatliners (1990) after which he was briefly engaged to co-star Julia Roberts.

On his new country album Down in a Hole, Sutherland the musician has even recorded a song about the 1991 split from Roberts, “Calling out Your Name”. (Taylor Swift would be proud.)

Sutherland went on to fame and awards (Emmy, Golden Globe) as Jack Bauer on the popular counter-terrorism series 24. Now he’s going from saving the president to becoming one.

Designated Survivor marks Sutherland’s return to series television and looks to be another big hit. According to a recent New York Times article, Sutherland rides the subway every day to a suburban Toronto set (Downsview Park Studios) with a crew he calls “extraordinary.” His mother and sister still live in Toronto and he is enjoying spending time with them. He still calls Toronto his hometown.

Politics must run in the family — at least the on-screen variety of politics. Kiefer’s own 28-year-old daughter, Sarah Sutherland, plays the daughter of President Meyer (Julia Louis-Dreyfus) on the cynical, but hilarious HBO show Veep.

Kiefer Sutherland doesn’t pick sides in the coming U.S. election. He told the Globe and Mail, “I have a lot of friends joke about if a certain candidate wins, would you help me get to Canada – which always makes me smile.”

Sutherland is mature enough now to play a president instead of a rebel. He also plays a professor in a sequel to Flatliners which recently filmed in Toronto. One of his favourite quotes is from the original film:

“In the end we all know what we’ve done.”