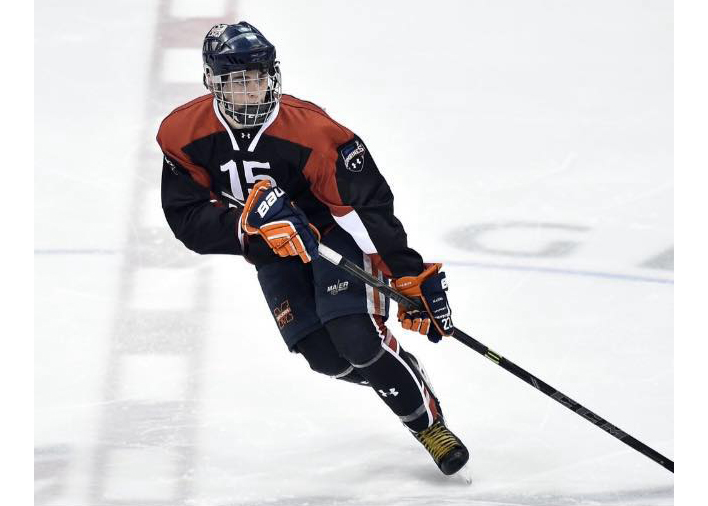 A record-breaking Neil McNeil athlete is heading to a new city next year after being drafted 18th overall by the London Knights in this year’s OHL draft.

At age 16, Liam Foudy has had a banner year, both with the OHL draft and his experience at track provincials. He was a double gold medalist at the 2016 OFSAA championships, winning the 100m hurdles and the 300m hurdles, the latter win breaking the OFSAA record. His win mirrored his dad’s experience of winning gold at OFSAA when he was a teenager, with Foudy benefitting from his dad’s coaching since Grade 9.

Foudy comes from a family of athletes – his dad, Sean, competed in track and field and played in the CFL, while his mother, France Gareau competed at the 1984 summer Olympics, winning a silver medal with the Canadian relay team.

“I almost had no choice but to be an athlete,” said Foudy, laughing.

Foudy said he’s tried to play almost every sport at school, but his main sports are hockey, soccer and track.

“My favourite was always hockey. I played it from such a young age and just fell in love with it,” he said.

“London’s always up there because it’s such a great organization,” he said of who he hoped would draft him.

“They’ve won many championships, and they won the Memorial Cup this year. When it was their turn to pick at 18th overall in the first round, I was hoping they’d take me and they did.”

Before he moves to London, he will be trying out for Team Canada 17U team in Calgary later this month.

While this is probably the biggest, toughest tournament he has attended, Foudy has a number of mentors to draw inspiration from.

Getting drafted to the OHL is a dream for many young hockey players, and Foudy offered this advice to young players with professional hockey goals:

“You don’t need to be in a rush to get into AAA right away,” he said. “I played AA right up until Bantam and then I switched to AAA for Bantam the year before the draft year just to get used to it. And then Minor Midget I played AAA.”

He said his dad didn’t want him to get “right into it” so he played AA for a year “and it was probably best for me.”

“You can still go to the OHL if you switch later, save some money,” he said. “It’s a lot cheaper, there’s less politics, you’re out there playing hockey with your friends, you don’t have to worry about anything.”

And is he ready for the politics of the OHL?