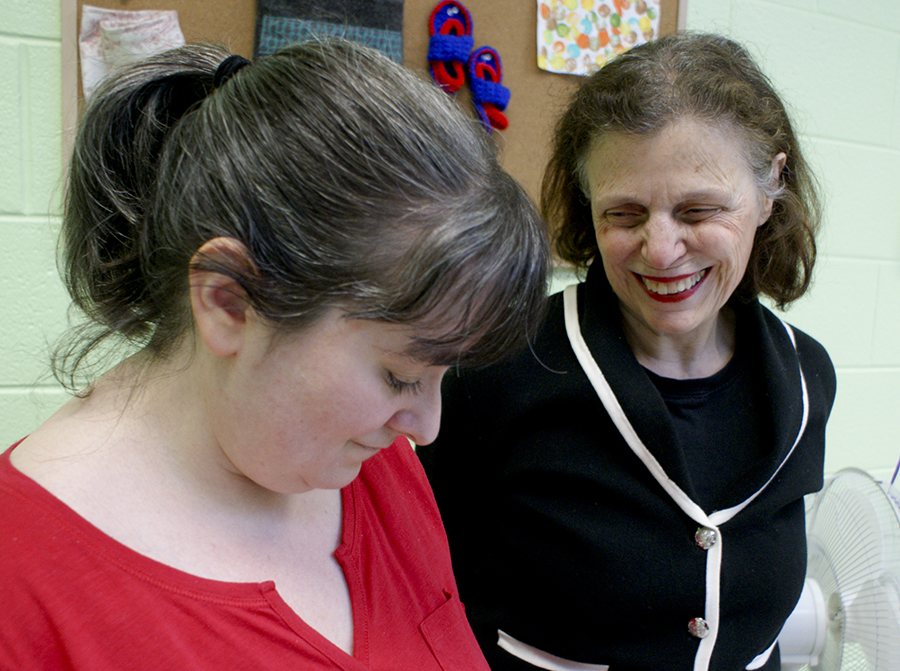 After 21 years guiding the growth of Pegasus, the East End program for adults with special needs, founder Marie Perrotta is handing over the reins.

Last week was her first official week of retirement, and the first week in many years she didn’t work out of her office above the program’s thrift store on Kingston Road.

The new director, Paula Murphy, started last week, and Perrotta is taking some time to ponder her next steps. Those steps will likely include more hikes, time with friends, travel with her husband, who also recently retired, continued community involvement, consultation, and maybe some teaching.

Perrotta’s impact on the Beach and greater Toronto community, through Pegasus and the various channels and opportunities that program opened up, cannot be understated. A program that started in her dining room and one community centre has blossomed into numerous centres and partnerships, as well as a social enterprise store. When she was named Beach Citizen of the Year in 2004, Bob Murdoch, then-executive director of Community Centre 55, said “she has taken the great left-outs of society and brought them into the life of the community. She has shown us the miracle of integration. The litmus test is the impact she has on this community.”

But she’ll be the first to tell you that Pegasus’ success was born out of the work and help of “hundreds of people” over the years and that it would not have become what it is today without the support of the community – and a lot of luck.

“We were so lucky,” she said. “Everybody embraced it. People that you knew and people that you didn’t know. This whole agency is really about a community response, it really is. And when I say community I mean levels of government, people who live in the neighbourhood … I think the participants and the staff have been the most satisfying part of the whole organization. It’s really been an experience in how many great people there are in the world.”

The idea for Pegasus came to Perrotta in 1993 when she and other parents of children with special needs were searching for programming for their adult kids who were no longer in school, and found their options lacking. Perrotta saw a need and decided to fill it, pulling together numerous experiences and ideas she’d had kicking around about special needs programming and inclusive community spaces to make the idea a reality.

She knew the first thing she needed was a space to hold the program, and after considering some churches and other larger spaces, she remembered the lifts at the parks and recreation centres.

“I decided to go to the parks and rec centres because of those elevators,” she said. “That’s what made me do it.”

The Beaches Rec Centre (which now hosts programming) was full when she first approached them – but they were encouraging in their response. She then approached Pape (now Matty Eckler), which not only said they had room, but pointed out a $3,000 grant she could apply for.

That presented the next challenge – finding a board, a requirement for applying for the grant. With her two-year-old on her hip, and thanks to the prodding of a city worker, Perrotta approached three people she knew in the community – the fourth board member, Margaret Ewing, who still remains on the board now, being a parent she knew – and they all said yes.

Perrotta said she remembers the first board meeting well. One of the board members went white, she said, at the daunting task ahead of them. But Perrotta said they had nothing to lose. The organization came together, her family and friends embraced a life where Pegasus was at the centre, and the response was overwhelmingly positive.

So positive, that Perrotta counts the organization’s managing of its growth as a major accomplishment.

“If you don’t manage growth, you’ll lose your mission, you won’t be able to provide the quality that you’re after, and we were always after quality,” she said. “That was what drove everything, really. Every decision we made was based on whether it would fit in with what we had set out to do. We try to find out what people want and then we try to provide it. We try to be the organization that helps people get what suits them.”

Perrotta endorses the next generation of leadership at Pegasus and is looking forward to seeing what comes next for the organization that’s been so close to her heart for so many years.

“It’s been so rewarding,” she said. “I’ve never had to ask myself whether my work was worth it. I’ve never had that question, not even once. It’s a gift, really. That’s the gift that Pegasus gave me – I worked hard and it worked, what more could you ask for?”

And true to form, a clarification comes next: “And when I say I worked, I mean lots of people worked hard … there were so many people involved in this.”

Celebrate Marie Perrotta this Friday, May 6 at the Matty Eckler Centre at 953 Gerrard St. E from 1 p.m. to 6 p.m. There will be food and fun, and everyone is invited.

Marie is a great one and irreplaceable. She’s earned her retirement!