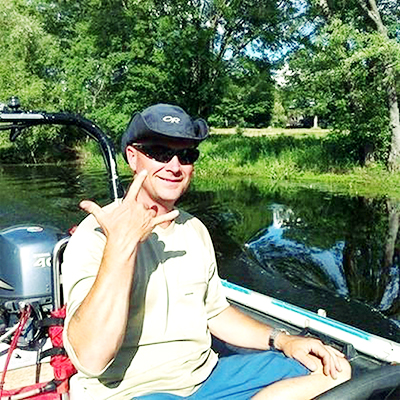 A woman whose husband was senselessly killed three years ago at a restaurant on the Danforth is trying to make sure that what happened to her family does not happen to anyone else’s loved ones.

Zilla Parker has launched a petition calling on Ontario’s lead coroner to hold an inquiry into her husband Dominic’s death, in the hopes that recommendations from that inquiry could lead to strengthened policies around severe mental illness and treatment.

A website set up to promote the petition says Zilla wants the inquiry “not to lay blame, but rather to identify what changes can be made to our health care system to better diagnose and treat mental illness in the early stages, so that other tragedies can be prevented.”

On September 14, 2013, Dominic, a firefighter, was in a Middle Eastern restaurant near Coxwell and Danforth when he was stabbed in the head by Nabil Huruy, a man who was later found to be suffering from paranoid delusions. Dominic later died from his injuries.

Huruy was found not criminally responsible for Dominic’s death on December 15, 2015, with the court ruling that he did not have a rational perception of the world around him, nor the capacity to make rational choices because of his psychosis.

“Since Dominic’s death, there have been others in our province who have been killed by people suffering from undiagnosed or untreated mental illness. This is a systemic problem in our society where, as the court said, severe mental illness is not diagnosed and treated before a tragedy strikes,” reads the petition. “The Office of the Chief Coroner has the discretion to order an inquest to allow juries to make useful recommendations to prevent other deaths in similar circumstances. Such inquests perform a critical role in increasing public safety, as the recommendations from inquests can lead to changes in legislation, policies and procedures.”

At the heart of Zilla’s petition is the fact that in the days leading up to the offense, Huruy was in contact with police and first responders at least three times, with those who interacted with him noting his erratic mental state.

“If Mr. Huruy had been held for an assessment of his mental state after any of his interactions with the police and first responders, Dominic would still be alive today,” reads the petition, which emphasizes that the system failed Huruy, as well.

Cheryl Mahar, a spokeswoman for the Ontario coroner’s office, said that while she could not comment on the specifics of this case, the coroner’s office does take into consideration public input, like petitions and letters, when deciding when to conduct an inquest into a death.

The vast majority of inquests are mandatory inquests, for example, deaths that take place in custody, but a small amount of inquests are done at the discretion of the coroner in the public interest.

How small? Out of around 15,000 deaths last year, there were 32 inquests, with 29 of those being mandatory and three discretionary.

Read Zilla Parker’s request for an inquest below: