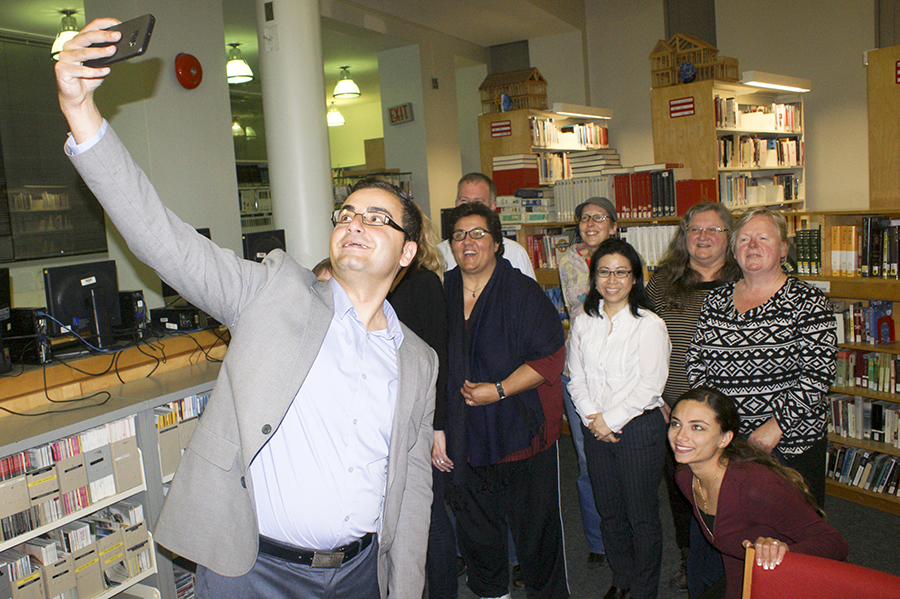 An East End pharmacist believes he and his colleagues should be doing more to educate parents about the dangers of prescription drug abuse among teens, so he’s encouraging others to start discussions like the ones he hosted at Malvern High School earlier this month.

Kyro Nagib, owner of the Pharmasave on Kingston Road, spoke to Malvern students, teachers and parents at two separate sessions on March 8, the first of what he hopes will be more outreach sessions about prescription drugs and the potential for their abuse.

“I want to get pharmacists out from behind their counters and in front of the people, so we can change the statistics,” he said.

Nagib explained the various types of prescription medicine available – stimulants, opiates, and tranquilizers – how each is abused, and how difficult they are to quit.

When used properly, these pills can treat chronic pain and provide needed treatment for patients with disorders like ADHD, narcolepsy, and anxiety – but he said it is all too common for them to be used improperly and without a prescription.

Nagib said he was compelled to start public outreach on this topic after a tragic situation that took place when he first became a pharmacist. An adolescent bought Adderall from a friend the night before an exam, and then collapsed after staying up all night. The boy died, and his family was left wishing that someone had warned him he couldn’t take Adderall – he had a heart defect.

“If he went to his doctor, his doctor would not have prescribed it, his pharmacist would not have dispensed it,” said Nagib. “This story was an eye-opener for me … If students and kids in general are not going into doctor’s and pharmacist’s offices to pick up these medications, then doctors and pharmacists should go to the schools and talk to the kids, warn people before they get themselves into trouble.”

He began investigating, learning that prescription drug abuse and addiction was a growing problem in Canada. According to government of Canada statistics, more than 80,000 Canadian teenagers used prescription drugs to get high last year. Canada is the second highest user of opiates in the world, behind the US.

Part of the rise in prescription drug abuse has to do with misconceptions that the drugs are safe because they are prescribed by a doctor or taken from the medicine cabinet at home. But they can be just as addictive as illegal substances, if not even more addictive, said Nagib.

“Just because it’s over the counter doesn’t mean it can’t cause harm,” he said.

He said parents should pay attention to warning signs such as changes in friends and behaviour, increased secrecy, or declining grades. It is important for parents to lock up medications and stay involved in their child’s life.

People who abuse prescription drugs “are often suffering in some way and need these drugs to get over certain problems,” he said.

If you discover your child has a problem, “surround them, make them feel loved and accepted, and let them know what they’re doing is harming you,” he said, adding that there are numerous groups and agencies that can provide support. “You are your child’s best resource.”