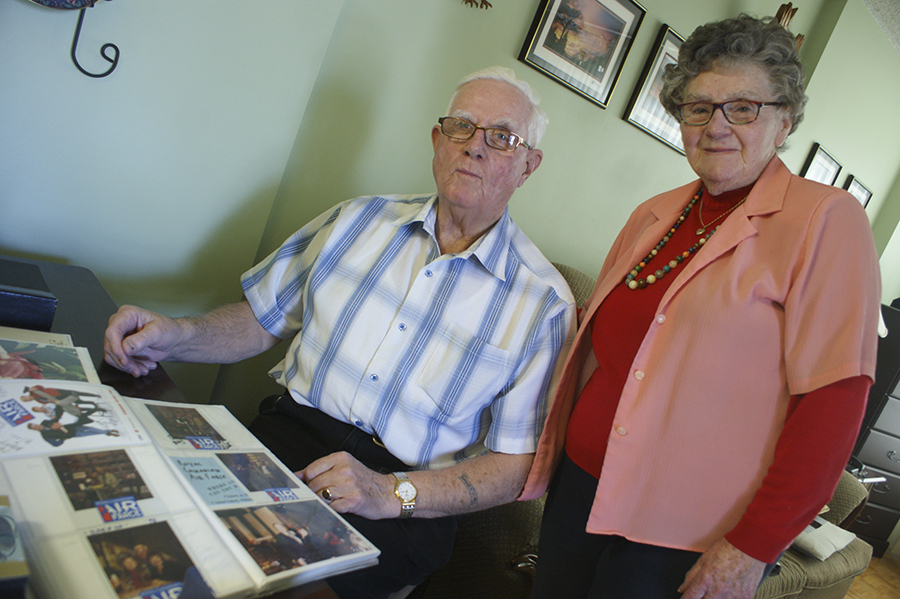 Bill and Mary Hall take a look through some of Bill’s often metaphorical photographs at their home Jan. 18. Photo: Anna Killen

When looking at art, finding – or being gently guided towards – an unexpected secret hidden in the work is a special experience. At once personal, bright and inclusive, the work shifts as the viewer sees from the artist’s view – it’s a thrilling experience, in part because it does not happen all that often.

But looking through Beacher Bill Hall’s photographs one has that feeling of pleasant surprise over and over again, when he turns out the light to reveal a luminescent tree trunk that wasn’t visible in the photograph before, points out a figure barely visible behind a lush bush, or, as in this exchange, when he directs his guest’s eye to the message behind a vibrant photograph:

“What do you see there though?”

Bill delights in sharing his photographs, and the mottos contained within those photographs, with anyone who fancies a look. The photograph of the butterfly and bee, for example, he gifted to a friend who was struggling with cancer – he thought it would bring her strength.

His work can be found all over the Beach, particularly at the Kingston Road Market.  Bill’s wife Mary says she’s lost count how many places have his photographs on their walls.

“I’ve never sold a photograph,” said Bill while giving this reporter a tour of his apartment, the halls and walls of which are covered with his work. But that doesn’t mean his work hasn’t been out there – it’s been on the cover of publications, in talk show dressing rooms, and he once mounted a show at Black’s.

He’s been taking photographs since he was 15, and has kept up with technology while still keeping some of his old camera gear intact. He doesn’t leave his house without his point and shoot camera, kept in a holster attached to his hip.

He also doesn’t leave his house without the other thing that’s attached to his hip: his wife, Mary.

“They used to call us the Bobbsey Twins,” giggles Mary, while giving details of their life together.

Mary and Bill have had quite the experience together – Bill says often people don’t believe all of the things they purport to do. “But it’s all true,” he said. They met in Wales when they were 18 – they’re now in their 80s – he worked in a garage, she worked in one of the shops, and they would travel on the bus together every day.

“One day I heard her singing at the back of the bus, told her to shut up, and haven’t stopped telling her since,” laughs Bill.

The two married and had two daughters. Then, years ago, one of their daughters wanted to move to Canada. She brought the whole family with her.

Now, the family has grown to include sons-in-law and two granddaughters. And the Halls have albums upon albums of photographs of friends and people they’ve met along the way – celebrities, politicians, coworkers.

Nature plays a big role in Bill’s art – with landscapes of the 1000 Islands and Nova Scotia, two of their favourite places to visit, and plenty of flower gardens from around the world.

The couple has had their fair share of time in front of the lens, as well. They’ve been on the cover of this newspaper after being crowned the Beach Celts of the Year in 2012, and were featured in the Toronto Sun as the picture of blissful retirement.

Mary says she misses Wales very much – “there aren’t very many Welsh here, you know,” she says – but have grown to love the Beach community they’ve called home for so long.

Bill supposes he has close to 10,000 photographs in his house. He always prints out copies, but keeps backups on his computer. Some of the photographs are so old he doesn’t have a digital record, just negatives tucked behind plastic album covers.

He has had time to devote to his art, in part, because of an accident that left him with a brace in his back and inability to work. That first year was very difficult, he said, bedridden and then walking with a cane and doing physio.

He wouldn’t have been able to do it without Mary, he said, and the experience underscored the couple’s personal motto: Don’t Quit – an ode to which can be found framed at the top of the hall, flanked by photographs that show the positive, unique way in which Bill sees the world.