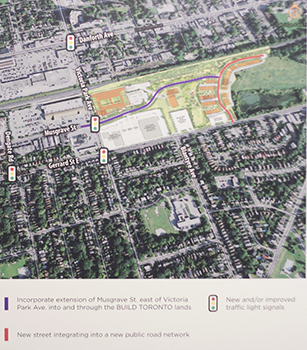 A Build Toronto chart at a March 18, 2015 meeting shows the traffic plan for the city-owned corporation’s upcoming development on the western side of the old quarry lands at Victoria Park Avenue and Gerrard Street East. The plan includes an eastward extension of Musgrave Street, a new residential street in the development, and changes to nearby traffic lights. Image: Build Toronto

Beach resident Alan Burke is hoping to take a petition that failed to sway the decision-makers at Scarborough Community Council and turn it into success at the Ontario Municipal Board.

In September 2015, Bernadette Warren attended the Community Council meeting with a 550-signature petition hoping to change the plans for the city-owned portion of the quarry lands east of Gerrard Street East and Victoria Park Avenue.

Warren’s petition asked for a higher percentage of park space – about a quarter of the land is dedicated to park space in the plan, she hoped for half – and specifically for the park to extend all the way along the rail line at the northeast portion of the land.

“For all intents and purposes, that land has been vacant for a very long time, and even though it’s not officially park, it’s been used by the residents as a park for a very, very long time. We’re talking 50, 60 years,” said Warren.

Community Council listened to Warren’s pitch, then proceeded to pass the official plan and zoning bylaw amendments regardless, approving the Build Toronto plan for a ‘T’-shaped park surrounded by low-rise residential housing and a big-box retailer at 411 Victoria Park Ave., the site of a former driving range at the northwest corner of the property.

Alan Burke and his East Beach Community Association are fighting for the right to act as Warren’s representative at an upcoming OMB appeal of the plan.

The ECBA covers the area from the former Toronto-Scarborough boundary east to the Hunt Club, from Kingston Road to the lake. While the Build Toronto project is north of his association’s area, he said the ECBA is the closest community association and that related traffic issues affect his area as well.

A meeting has been planned for Sunday, Jan. 17 from 3 to 5 p.m. at the Beaches Recreation Centre, where Burke will first hold an emergency ECBA meeting to elect a board and approve his actions as president, and then inform the wider community of his concerns with the plans for the site.

Burke said he hopes to negotiate with the city on both issues before the full OMB hearing in the spring.

“I’ve already told the city, ‘I don’t really want to go to the OMB, but if you’re not going to listen to me, that’s my only real other alternative,’” he said.

He said the traffic concerns are crucial to keeping traffic from diverting to the small residential side streets running off either side of Victoria Park. He also takes issue with the extension of Blantyre north into the new development.

“If I don’t do this now and let this thing be built, it’s going to cause a huge problem. It’s then going to take me three to five years to get the money in the capital budget to fix it after the fact, hence that’s why I’ve appealed it to the Ontario Municipal Board,” said Burke.

To the east of the land being developed by Build Toronto, a city agency, is land that has been approved for the development of high-rise residential rental buildings. The planned development, by The Conservatory Group, has been the cause of local protest for decades.

It’s unclear why nothing has been built yet. Despite the lack of construction, The Conservatory Group has appealed the Build Toronto plan to the OMB, claiming the close proximity of the Build Toronto low-rise proposal as a problem for their previously OMB-approved towers. RioCan, the owner of the existing plaza at the corner of Gerrard and Victoria Park, is also appealing the plan.

For her part, Warren said she doesn’t want to stop development on the site, but she believes such a large area that acts as a haven for wildlife could be something more than suburban-style housing and a big box store. She cites the Brickworks on the Bayview extension as an example of an ecologically forward-thinking example of what can be done on a former industrial site gone back to nature.

“I think the East End deserves something great, and I think we could do something great there. There are not too many vacant pieces of land within the city limits anymore,” she said. “Why not Victoria Park and Gerrard?”