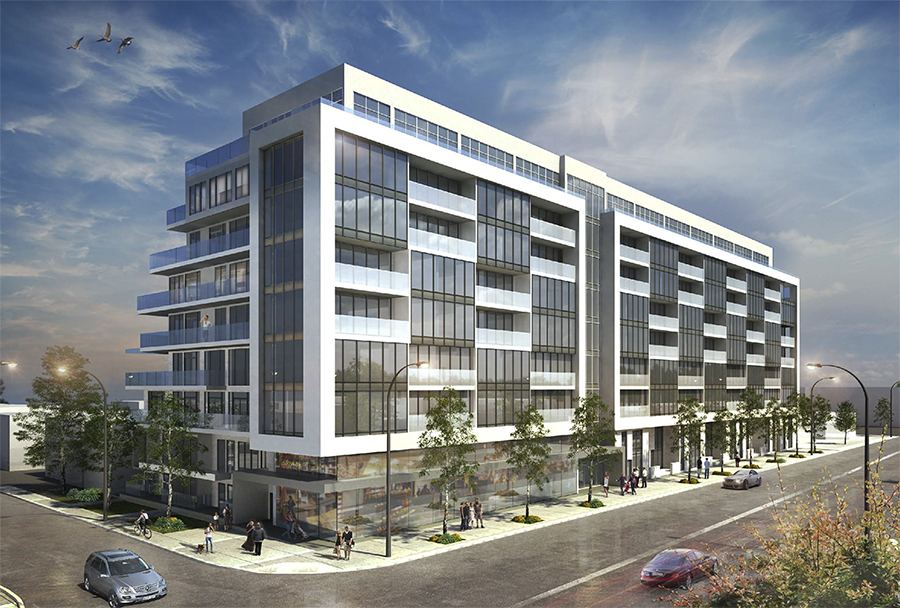 A concept drawing shows the eight-storey condo proposed for the south side of Danforth Avenue at Morton Road. Residents would access a two-level underground garage from a rear lane off Patricia Drive.
IMAGE: Marlin Spring Investments / Graziani & Corazza architects

Danforth East residents got an early look this month at an eight-storey condo proposed for Danforth Avenue and Morton Road.

Covered mostly in glass, the 166-unit building would include ground-floor retail and commercial units, plus two levels of underground parking accessed by a rear lane off Patricia Drive.

Replacing two buildings – a vacant Canada Post office at Morton and the former Wise Guys hotel and bar next door – the condo would include 14 rental suites to replace those lost by demolishing the hotel, according to city policy.

“There is a lot of potential here,” said developer Zev Mandelbaum, speaking to the crowd of about 35 residents who came to a Nov. 9 preview meeting held at the Danforth/Coxwell Library.

Mandelbaum said the project was inspired by the many strollers, cafés, shops, and subway stations he saw in the area – all signs, he said, of a vibrant neighbourhood ready to grow.

“We are here to actually learn from the community,” Mandelbaum added, noting that he and his company, Marlin Spring Investments, have already approached the Danforth Mosaic BIA and Danforth East Community Association for feedback, as well as organizing the Nov. 9 meeting, held in addition to the formal public consultations that city planners will require.

Leading the meeting was a West End city councillor, Joe Mihevc. A 20-year veteran of development applications, Mihevc will stand in for local Ward 32 councillor Mary-Margaret McMahon throughout the process, given that McMahon had to recuse herself because she lives close to the proposal.

Marlin Spring and its project company, Danmor Developments, will need a council-approved rezoning to allow the 27-metre building, which is four storeys taller than what a developer could build as-of-right.

Councillor Janet Davis, whose ward includes the north side of Danforth across from the proposed development, said it is the third such proposal in the area over the last couple years, and she expects more.

“There is a lot of pressure for development on the Danforth,” said Davis. “We want to get it right.”

After hearing from Marlin Spring’s planning consultant, Laurie McPherson of Bousfields Inc., who noted that Danforth is listed as an avenue for higher-density buildings in Toronto’s official plan, residents heard a presentation by the principal architect, Enzo Corazza, of Graziani & Corazza.

Corazza pointed out how the building steps back from the third floor on the south side, and while the Danforth frontage only steps back at the seventh floor, it features a “picture frame” structure between the first and sixth floors as well as inset balconies to add variety to its north side.

Out front, the five-metre sidewalks would be slightly wider than the 4.8 metres the city requires, Corazza said, while the ground floor would have a mix of retail space and two-storey “live-work” units that could be used as offices, homes, or both.

At this stage, the building includes no plans for three-bedroom units, but when asked, Corazza said that is something his team is considering.

Residents at the meeting asked about traffic to the rear lane off Patricia, which would be widened to the city’s standard and designed to access interior garbage and loading areas as well as the parking ramp.

People who live directly behind the proposal also asked about the construction schedule, and were told the project would likely take three years from start to finish.

As for the look of the building, residents seemed divided. Two people told Corazza they liked the light, open look of the exterior, which he confirmed was 90 to 95 per cent glass.

But several others said the glass and height of the building were out of step with the character of buildings on that stretch of Danforth Avenue.

“I’m all for gentrification,” said one resident, before adding that a four- or even six-storey building would better suit the neighbourhood.

“It’s a neighbourhood of three-storey buildings, mostly brick, a little bit of wood,” said another, who said the building looks too much like a University Avenue hospital.

For more on the proposal, see the Development Applications page and search for 2301 Danforth Ave. in Ward 32.

This condo looks like it will cast massive shadows on Danforth and seems to not follow the typical idea of an “angular plane” to set the building back near the top – usually the top 2-3 storeys have to be set back. It also looks like 9 storeys, not 8, because the planners often call a floor a “mezzanine”.

The Carmelina condo is massive and the Avenues guildines/rules were not finished when it was approved – they reduced the streetwall from the width of the road to 80% of the width.

In short, it looks like a typical case of the developer exceeding the Avenues guiledines that were meant to be maximums and only achievable under perfect condition. But this is how things work in this city, the planners want a lot more density and do not enforce the rules that are supposed to make it fit in.

More of these condos will make Danforth look like a dark canyon.

I believe Carmelina paid money through Section 37 – as most developers do – to get the extra height.

But, having been to a meeting or two on Carmelina, the neighbours and the councillor at the time knew there was no fight to be had, they’d lose at the OMB, and density makes sense near subway stations. So the protests were fairly quiet.

As for the canyon effect on the Danforth, I think we’re generations away from that. Just one guy’s opinion.