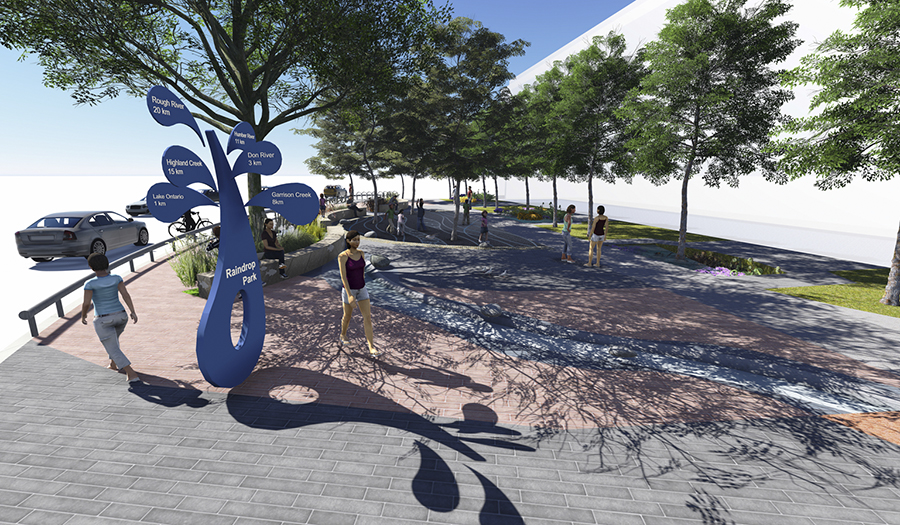 A preliminary concept drawing shows Raindrop Plaza, a stormwater-collecting plaza that would replace a right-turn lane at the northwest corner of Coxwell Avenue and Dundas Street East.
City of Toronto / Schollen and Company

Change is welling up on a corner of Coxwell Avenue.

Landscape architects are designing a small, rain-collecting plaza to replace a turning lane on the northwest corner of Coxwell and Dundas Street East – a test case for what city planners hope is a wave of street-greening projects across Toronto.

Meanwhile, Buena Vista Development has applied for a rezoning so it can build a set of four-storey townhouses that front the same corner and two neighbouring properties up Coxwell.

With 22 units in all, each townhouse is designed to have one two-bedroom home on the first and second floor, and another on the third and fourth. Upper units would have rooftop patios, while lower ones would have small gardens out front, with the ones along Dundas facing the plaza.

All the townhouses would be served by an underground parking garage accessed from an existing lane off Coxwell.

Planners with Buena Vista say the proposal was designed with the plaza in mind – a move welcomed by Markus Hillar, the landscape architect from Schollen and Company who the city hired to design the plaza.

Known so far as Raindrop Plaza, Hillar said it is designed to use porous asphalt and a tiny ‘creek’ to channel rain off Coxwell Avenue and into an underground reservoir, where the water can nourish a stand of street trees and other native plants.

“The idea is to be responsible with the water, and to irrigate the trees so they have a chance to have a vigorous life,” he said, speaking at a public preview held on Nov. 26 at the 55 Division police station across the street.

Patrick Cheung, a senior engineer with Toronto Water, said watching storm water pour off Coxwell and get filtered by stone, soil and plants in Raindrop Plaza would make a good day-trip for local elementary schools.

In fact, the draft plan calls for water-themed art by local schoolchildren, as well as a signpost pointing to local landmarks in the Toronto watershed, such as Rouge River or Garrison Creek.

“We do imagine that this is for the kids,” said Cheung.

“But it’s learning for everybody. We’re learning, the kids are going to learn, and it’s a nicer place for the neighbourhood to gather.”

No budget has been set yet, but Sheila Boudreau, an urban designer with the City of Toronto, said it’s expected to be built before the end of 2016.

Another public meeting will be held once the final plan is ready, Boudreau said, adding that Schollen and Company is also helping develop a citywide street-greening standard that could lead to similar projects on roads across the city.

“A lot will lead from this little piece of land,” she said.

Correction: This story has been corrected to reflect the fact Raindrop Plaza is not classified as a ‘parkette,’ and that Sheila Boudreau is an urban designer with the City of Toronto.