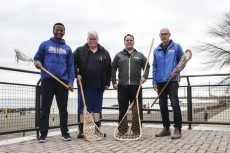 Toronto Beaches Lacrosse Club (TBLC) celebrates their 50th anniversary this year, marking a moment in history for a club and sport that has touched generations of Beach families. While 50 years is an impressive milestone, it is a relatively short time in comparison to the hundreds of years lacrosse has been played. According to the […]

Jack Kelly grew up watching the Toronto Beaches. Today, he’s scoring for them. At 17, Kelly is among the youngest rookies to join the local Junior A box lacrosse team, which has players up to 21. “It’s so much faster,” says Kelly, a Grade 11 student in the athletics program at Birchmount Collegiate. “Everyone’s bigger, […]

Leigh Anne Jacques says doctors still don’t really know fully what happened to her daughter Jilly, 13. What both Jilly and her mother know, however, is how thankful they are that Jilly is healthy and happy, and finally back at lacrosse after two years away, due to multiple brain surgeries and several long hospital stays. […]

No matter what the temperature is outside, the ice will melt at Ted Reeve Arena this week and clear the floor for lacrosse. It’s Canada’s summer sport, and on this side of town no one plays it better than the Toronto Beaches. The Junior A team signs players from all over the city and Ontario. […]

When Disney’s $250 million western The Lone Ranger opens on July 3, there will be a lot of talk about Johnny Depp playing the role of Tonto. This is not that story. For me, the only ‘Tonto’ is Jay Silverheels, who went from playing lacrosse for Six Nations on the Grand River near Brantford to […]

Five years ago, the Jammer Classic started as a small, two-day tournament for midget field lacrosse. Today, says Mark Kuhlmann, the Jammer has become the spring kick-off for Ontario’s minor field season, now joined by varsity teams from as far as Detroit. Then and now, everyone who runs the pitches at the Cherry Beach tournament […]

The Junior A Lacrosse season will soon be upon us once again, and the Toronto Beaches are wasting no time in preparing for it. Management has been slightly shuffled and new players already drafted, setting the tone for the spring. Ryan Cousins, who last year held the position of Assistant General Manager is now the […]

Zooey Smash ‘em well, left, from Toronto’s Derby Debutantes, lays a shoulder on Holly Hox of Windsor’s Border City Brawlers on June 23, in GTA Rollergirl action at Ted Reeve Community Arena. The game, won by the Brawlers, was the second of a double header. For upcoming games, including an all-day, 14-team tournament on July […]

The Toronto Beaches Junior ‘A’ Lacrosse team is slowly working its way up through the standings, after a trio of much-needed wins over the past two weeks. On May 27, the team travelled down the road to Mississauga, for a definitive 16-8 win over the Tomahawks. Beaches’ Jackson Hulbert picked up four goals and three […]

The Toronto Beaches Junior A Lacrosse team drew the biggest crowd in years to the team’s home opener on May 13 at Ted Reeve Community Arena. About 300 fans crowded the arena to see the newly rebuilt team take on the St. Catharines Athletics. The arena and the team were looking fresh, with new banners […]