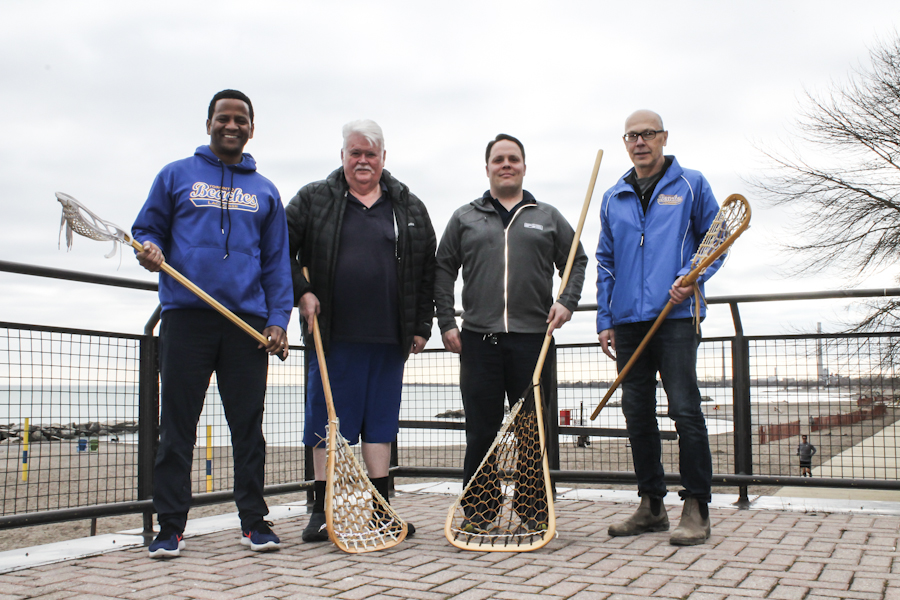 Toronto Beaches Lacrosse Club (TBLC) celebrates their 50th anniversary this year, marking a moment in history for a club and sport that has touched generations of Beach families.

While 50 years is an impressive milestone, it is a relatively short time in comparison to the hundreds of years lacrosse has been played. According to the Federation of International Lacrosse, the sport was developed by North American First Nations, who initially used what was then known as “stickball” as a training practice for warriors.

Dr. William George Beers, a Canadian dentist, has since been credited with founding the Montreal Lacrosse Club in 1856 along with creating rules around the game that included a rubber ball and a redesigned stick.

Since then, the game has changed even more with TBLC president, Frank Ham saying there are now two versions. Box lacrosse is played on a floor while field lacrosse is played outside on a field. “They’re completely different games,” he said. “But both games are derived from the original native games.”

And the passion for both is clear.

Among those discussing the TBLC recently were John Steele, former president and unofficial “grandfather” of the club, John Salter, a multi-generational lacrosse player whose father and children are involved in the sport, current director of marketing and communications, Ron Huddleston, who was also a professional lacrosse player in Germany at one point in his career, and Frank Ham, who, despite admitting to being a latecomer to the sport, is equally as passionate about it as the rest.

“I had never been involved in lacrosse in any way, shape or form until I moved to the Beach,” explained Ham. “I was walking down the boardwalk with my three-year-old son and they’re playing lacrosse outdoors and my son saw that and said, ‘Gee I’d like to try that’ and now thousands of hours later of involvement in the sport, here I am.”

But when it comes to lacrosse, this sentiment is far from unusual.

“It’s not a mainstream thing. It’s not well publicized but it’s a tight community and it’s a lot of people who are very committed to it,” said Salter.

Huddleston, who moved to Toronto with his wife a few years ago, said that he “specifically looked for a lacrosse club because I know it’s a nichey sport. I can always find a community with my stick.”

That sense of community pairs nicely with the tight-knit Beach community, and might explain why it is so popular here.

“I think the Beach has a real sense of community and a real pride in being a small community and supporting all the different sporting endeavours and the businesses,” said Salter, noting that the lacrosse field was the “place to be” when he was growing up. “We walked along the boardwalk on Kew Gardens and it was perfect. It was a focal point for the community. I think it still is in some regards. It used to be Friday nights with the lights on, lots going on in the clubhouse and it’s done mostly thanks to local sponsors, local business owners. Everybody comes together to try to keep it. It’s pretty neat.”

And no matter how old or successful the players get they always come back to the club, the group explained.

“The interesting thing: people who have played pro, almost all of them have come back and give back to the team by coaching younger kids,” said Ham, with Steele adding “that’s one of the nice things about lacrosse – you’re never too big to come back and help little kids play. And it speaks volumes.”

For Salter, this again points back to the fact that it’s all about the love of the sport.

“[New recruits] don’t come with the intention of being a professional athlete,” he said. “Whereas a young boy playing hockey might say I want to be an NHL hockey player, I don’t think that’s the case for lacrosse.”

But that’s not to say the club hasn’t had many success stories over the years.

Damon Edwards, who currently plays for the Toronto Rock, “is probably the fastest runner and he played for the Beaches all the way through,” said Steele.

“And we’ve had girls who have had scholarships,” noted Huddleston.

“There’s one misconception I’d like to put to rest,” he said. “Sometimes people think because it’s a niche sport, it’s extremely expensive or it’s just not something that they will have access to and that’s just not the case. If you compare the cost to play lacrosse to what it costs to play hockey, it’s a fraction. It really is. It’s a very accessible sport and I’d like to encourage more people to sign up because it is a great sport and financially it’s just not the strain that hockey is.”

The other misconception? “If you look back at basketball in the early 70’s, they all wore tight shorts. It’s the same in lacrosse. [But] now we all wear baggy shorts,” they said laughing. “Less embarrassing!”

Toronto Beaches Jr. A Lacrosse Team play its first home game of the OJALL season on Friday, May 12, 8 p.m. at Ted Reeve Arena.