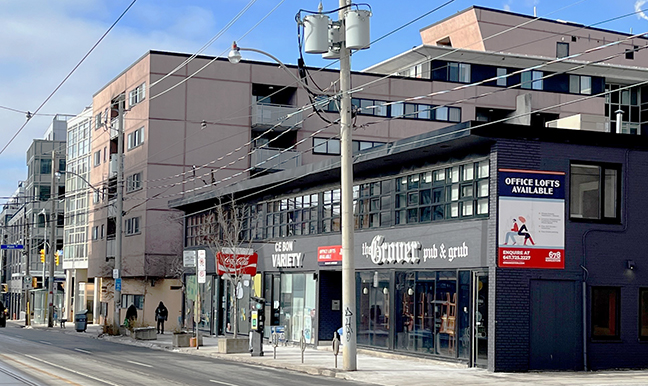 The Grover on Kingston Road, just east of Main Street, announced last month that it will be closing.

Local residents are reacting with sadness to the news that The Grover pub on Kingston Road just east of Main Street is permanently closing.

The Grover owners posted on their social media in December that they would not be re-opening in the new year. The announcement said the rent for the pub is not “sustainable” and the landlord was not willing to negotiate with The Grover.

“On Dec. 16, The Grover closed its doors after 40 years. A Kingston Road landmark, community hub, and meeting place,” said the announcement.

“Our family took on this business in August of 2020, thinking we were at the tail end of COVID. We navigated our way through the constant closures, restrictions, staff changes/shortages, family and staff illness, even the sudden death of our chef, Joseph, in September.

“Unfortunately the rent is not sustainable and impossible for us to run a business during the recovery phase from COVID and our landlord is not willing to negotiate to keep us here.

“We thank each and every one of our loyal guests, many who have become our friends and the unwavering support of family,” said the announcement.

The Grover Exchange continued what was a very long history of taverns at the corner of Kingston Road and Main Street.

Back in the 1840s, the O’Sullivan Tavern (also known as the Blacksmith Arms) was a popular stopping point for farmers heading to markets in the city.

From there, the corner saw the Boston House, the East Toronto Hotel, later the Benlamond Hotel, which was known as The Benny. In 1989, the Benlamond Hotel was torn down and replaced by The Norm Houghton Complex residential building run by The Neighbourhood Group.

In his Beach Memories column in Beach Metro Community News, local historian Gene Domagala wrote about the history of some of the taverns in the Kingston Road and Main Street area. 9 https://beachmetro.com/2011/05/18/booze-gambling-%e2%80%93-beach%e2%80%99s-sinful-revealed/ )

Former Beacher John Watt, who recently held a reunion for Malvern Collegiate alumnae and other area residents from the 1960s and 1970s recently at The Grover, said he was sad to hear of its closure.

He said after playing hockey with the Balmy Beach Club’s men’s league at Ted Reeve Arena on Friday nights, going for a few beers afterwards at The Grover Exchange and The Grover was a regular tradition.

Watt, who now lives in Victoria, B.C., said the reunion he hosted on Oct. 22, 2022 at The Grover was very well attended and brought back many memories; be them of The Grover or of the Benlamond Hotel. He said photos he posted from the event received a large social media response.

“So glad I flew in and had a last gathering of 1960s/70s,  it was a great final farewell sendoff. Little did I know after taking those photos it would be the sad ending six weeks later,” wrote Watt.

He said it reminded him of another Kingston Road landmark that Beachers of his era said farewell to — The Alpine Hotel which was located just east of Victoria Park Avenue.

“We’re losing all our Kingston Road, Beach landmarks, bars and pubs,” wrote Watt. “In the 1980s we lost the Benlamond Hotel or ‘Benny’ as we called it then. I had my first draft beer (underaged) there while I was at Malvern. It cost 20 cents.”

Others on social media also lamented the closure of The Grover.

“The Grover food and friendly atmosphere will be missed by friends and families. This is very sad,” wrote moovinintherightdirection on Instagram.

“Such amazing owners and staff. It was a gem in the neighbourhood and your restaurant and warmth will se so missed. Take care,” wrote Tracy Cook on Facebook.

“What a sad, sad day. The Grover will be missed and so will the amazing staff,” wrote Julie Corrigan-Lindsay on Facebook.

It is not known at this time what if any business will take the place of The Grover at 676 Kingston Rd. There are still other business operating in the two-storey building and a sign that says office loft space is available for lease on the second floor.

Beach Metro Community News reached out to the landlord of the building that The Grover is located in for comment, but has not yet received a response.

“Farewell Grover Pub and aka The Grover Exchange” thanks for all the fond memories! Big thanks to Beach Metro News and Editorial staff for not forgetting the “History of the Grover and that legendary Beach historic location” and history of Main St and Kingston Rd going back to the 1840’s with 0’Sullivan Tavern great feature and read and keeping our beach history alive..