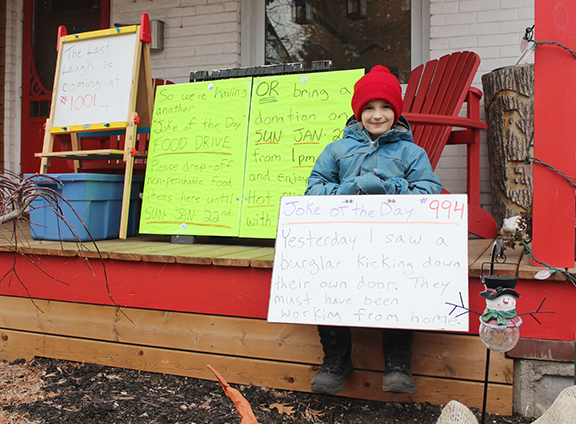 Grayson Clifford in front of The Joke House on Norwood Terrace last week. The last laugh, joke 1,001, will be posted on the front porch on Wednesday, Jan. 18. A community celebration of the more than 1,000 days of The Joke House will be held on the afternoon of Sunday, Jan. 22. That event will also be collecting donations and raising funds for The Daily Bread Food Bank. Photo by Alan Shackleton.

The last laugh is coming to The Joke House on Norwood Terrace this week.

Joke number 1,001 will be posted up on the front porch of the home between Norwood and Enderby roads (north of Gerrard Street East) that has become known in the community as The Joke House on Wednesday, Jan. 18.

Since late April of 2020, seven-year-old Grayson Clifford (with help from his dad Eric and mom Robyn) has been posting a joke each day in front of the house. It was done as a way to cheer people up during the early days of the COVID-19 pandemic.

“So the story is that there was a joke house at Enderby and then they stopped, so I thought we could take it on especially during the pandemic,” Grayson told Beach Metro Community News in an interview last week.”

While the last joke will posted up on the porch on Jan. 18, it will remain on display until Sunday, Jan. 22 when the family will host a community celebration and food bank fundraiser.

From 1 to 3 p.m. on Jan. 22, donations of non-perishable food items and monetary donations will be accepted at the house for The Daily Bread Food Bank. The family will also be selling hot chocolate to raise funds and there will be a ceremony in which Grayson will officially take down the last joke.

In February of 2022, the family also held an event for Daily Bread in which 300 food items and $600 in cash was collected.

Grayson said they are holding this Sunday’s food drive “so that people who don’t have food can get food.”

The last joke, number 1,001, has been written by Grayson and his dad Eric and is ready to go.

Grayson said 1,001 is his favourite number and it was a nice number on which to end The Joke House.

Grayson and his dad wrote many of the jokes but they also had friends, neighbours, family and complete strangers sending them jokes. That included people who would knock on the door with jokes.

Eric said that sometimes people also knocked on the door because they didn’t get the joke.

More than a 1,000 days of coming up with jokes is a lot of work and it has been a challenge sometimes to come up with them, both Grayson and Eric admitted.

While it is hard to remember all the jokes, Grayson said one of his favourites was:

“What do you call a silent fart?

Looking back on the past 1,000 days, Grayson said he was happy The Joke House was there for the community over what have been a tough few years.

“I thought it was nice to give people some smiles and also have some fun,” he said.

“I think that it gave people something to be happy about during COVID,” added Grayson. “We’re going to have a ceremony where I take down the last joke.”

Norwood Terrace is also known for another house that often displays flags, and explanations of what those flags mean.

Eric said that one time he told the flag house owner he was having a joke with a Swedish theme and the flag of Sweden then went on display.