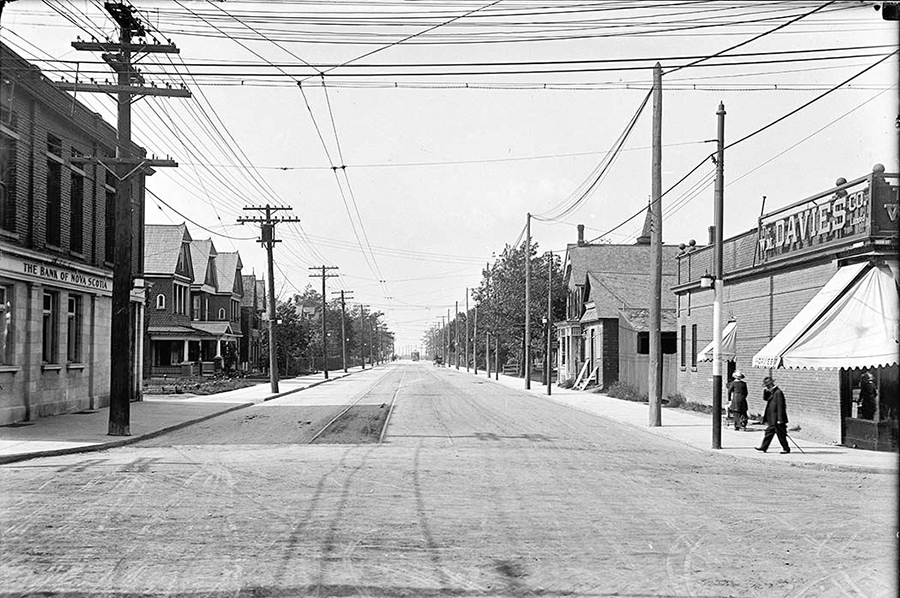 This photo shows the view west from the corner of Main Street and Gerrard Street East in 1915, seven years after the Town of East Toronto was annexed by the City of Toronto. PHOTO: City of Toronto Archives, Fonds 1231, Item 2211.

The history of our area here in the east end is sorely neglected. Our political area used to be called the Town of East Toronto from the years 1888 to 1908.

Now there has been a lot written historically about the Town of East Toronto by a number of people. However, there seems to be a lack of attention to the boundaries of the town and its importance to the establishment of the growth of our area.

The main reason the town was formed was because of the great freight yard and marshalling yard of the Grand Trunk Railroad, which later became the Canadian National Railroad (C.N.R.). The yards were centred around the present day Main Street and Gerrard Street East areas, and employed approximately 500 people. The railroad employees needed housing, food, transportation, clothing etc. So, the politically minded people and the Grand Trunk petitioned the powers that be and they formed the first village of East Toronto, and it eventually became the Town of East Toronto.

The boundaries of the town were on the west side Maclean Avenue to the east past Beech Avenue, and from the lake at the south end to north of Danforth Avenue. As the town went further north its east west-boundaries became wider just south of Kingston Road – basically running from west of Main Street to almost Lawlor Avenue in the east up to Gerrard (then called Lake View Avenue). North of Gerrard its east west boundary extended a little bit further east than Lawlor to take in the rail yards.

It had three distinct wards.

In 1908 the Town of East Toronto had a population of 4,700 people from all walks of life. This was due to the Grand Trunk being one of largest and busiest freight yards in Ontario. That helped make East Toronto a success.

The town was very progressive and had its own city hall and jail located at Main Street and Swanwick Avenue. The town also had its own education system, having three public schools and one high school, originally called East Toronto High School and then later changed to Malvern.

The Town of East Toronto had its own fire station on Main Street and its own water system with a large 120-foot, 200,000-gallon water tank on Gerrard Street. Remember, this was many years prior to the R.C. Harris Water Treatment Plant being built on the lake at the east end of Queen Street East.

Also, the Town of East Toronto had its own hydro-electric system on Gerrard for the benefit of commercial and residential buildings in the area. The town also had its own small transportation system.

East Toronto was very progressive in the health and library areas as well. The first hospital was located at Main and Gerrard in what was called the G.T.R. YMCA. It also housed the community’s first library. The town also had a funeral parlour, at Main and Danforth, which is still in existence. There were several lumber and coal yards in the town which also employed large numbers of workers.

At Main and Gerrard, the town also had one of the largest bakeries in the east end. It was called Snell’s bakery and was on the southwest corner.

On the sports scene, there was baseball, tennis, rugby, soccer, a curling rink, a shooting range and its own horse racing track. That track, Newmarket Race Track located just north of Danforth, hosted the Queen’s Plate in 1868. The town also had many other recreational and social attractions.

Yet there remains a dearth of history about East Toronto. People, especially children, should know about the area’s history. They could tie learning about the history in with Kimberley Public School, at Main and Swanwick, that was originally called Mary Street School and has some 130 years of history.

I have done many historic walks along Main Street over the years and have always asked why are they no signs recognizing the heritage of the Town of East Toronto. I am now asking residents to call for historic plaques outlining the area’s past and to recognize it on the local street signs.

Lovely article, in reference to your call to action, how would we go about the below as a resident of the area?

“residents to call for historic plaques outlining the area’s past and to recognize it on the local street signs.”