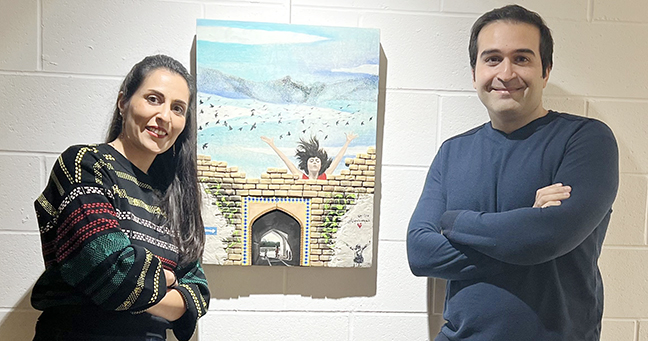 Artist Shahrzad Amin debuts her work at The Bridge Obscura: Healing Bonds exhibit now on at the Riverdale Hub on Gerrard Street East. This photo shows Amim with her husband Mohammed at the exhibit which runs until Dec. 31. Photo by Sean Meral.

Artist Shahrzad Amin debuts her work at an exhibition now on at the Riverdale Hub on Gerrard Street East. The Bridge Obscura: Healing Bonds exhibit is a celebration of Iranian culture.

Amin endeavours to bridge the gap between Iran and the rest of the world with her art. Her work utilizes several different mediums, whether it be sculptures, paintings, or video.

Amin got into clay work and sculpturing as a young girl at the age of 12. She has never looked back since that day, receiving her BFA in sculpture and installation at the University of Tehran.

Arriving in Montreal in 2010, Amin was able to find work in her field, but not long after decided to get out and do it herself.

“The workplace was like a prison for me,” said Amin. “I saw some people working the same position for 20 years, and I knew I really didn’t want this kind of life for myself.”

Wanting to break out of her ‘prison’, she began working on her piece Witnesses which are small sculptures featuring desaturated figures with expressive faces. She took inspiration for her Witnesses from the Tell Asmar Sculpture Hoard, which were Mesopotamian effigies discovered in Iraq in 1934.

According to her artist statement, Witnesses is “a constant reaction to fundamental aspects of modern life such as democracy, human rights, equality, capitalism, migration and the plurality of the society we live in. They witness that humankind is destroying itself because of a lack of values.”

A representation of powerlessness in the face of tyranny, all the Witnesses can do, is simply stand in astonishment.

Amin wants to break the stigma created by the west about Iran and show the world what real Iranians are like.

“My thesis at OCAD University was about the cultural connectivity, and I made a short movie on a bridge in my hometown, Isfahan,” said Amin. “These are regular people, they are not terrorists, they are not dangerous.”

Amin said that sanctions play a role in creating this stigma about Iran. Sanctions hurt citizens disproportionately in relation to a county’s leader, and result in an isolation from the surrounding world.

“Most cannot have a normal life, they cannot connect with people in other countries,” said Amin. “The currency dropping is very bad and means that only two or three per cent of Iranians can afford to leave the country.”

Amin said her exhibit is a celebration of Canadian and Iranian culture, and her body of work is something she could have only made as an immigrant.

“For all immigrants, we have the same feeling when you are far from your country, the feeling of wanting to save the connection,” said Amin. “I appreciate what I’ve learned from being here in Canada and the connections I have made here.”

Bridge Obscura: Healing Bonds will be on display until Dec. 31 at the Riverdale Hub until the New Year. The Riverdale Hub is located 1326 Gerrard St. E. For more info, go to https://riverdalehub.ca/

For more information on Amin and her art, please visit https://www.shahrzadamin.com/