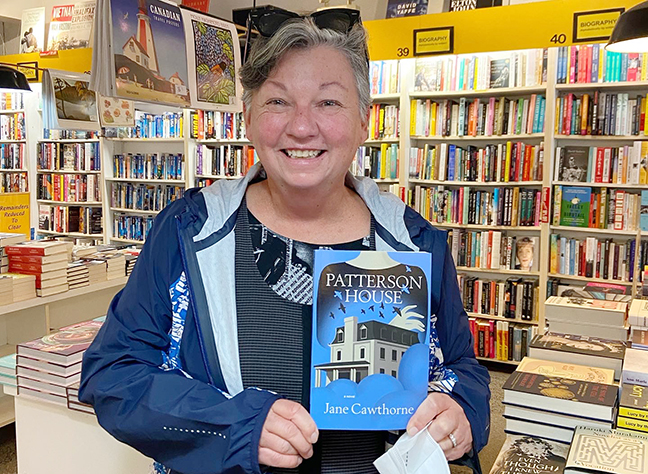 The story follows Alden Patterson, a fictional, once wealthy woman who houses injured First World War veterans in the decaying house left for her by her grandfather the late William Patterson.

In addition to drawing inspiration from the Beach neighbourhood, Cawthorne found inspiration for the character Constance, a foundling, from her aunt by the same name.

“There wasn’t a lot of words for a woman like Constance and I wondered what it would have been like to be a woman like her in that time,” said Cawthorne.

A feminist, Cawthorne had taught women studies at Mount Royal College in Alberta, and it is a feminist lens that informs her writing. She has created several other written works and is even a playwright, having written The Abortion Monologues in 2015.

“I think about what happens to women and the kind of barriers they face to realize their full potential,” said Cawthorne. “It is so interesting when they are just about to burst through those barriers, when it all starts to click, and they see their way forward.”

Having done academic writing for most of her life, Cawthorne didn’t get into fiction writing until 2006. This gave her the chance to be able to tell her own story, without any need for precedent or support from others.

“I think people are willing to open their minds with fiction in a way that they’re not in academic work,” she said. “They’ll meet this character Constance and this character Alden and wonder ‘what are they all about?’ and just go with it. That is really exciting for me.”

Although the story is fictional, Cawthorne will often have readers message her, saying they know which house is the Patterson house.

“I know where I put it geographically, but it doesn’t actually exist there, so I love that readers think that they know where it is because it tells me that I did a good job describing the setting,” said Cawthorne. “I’d love to ask the audience, where they think it is and if they guess right, I’ll give them a free book.”

Being born in the Beach, at the foot of Willow Avenue, Cawthorne’ favourite local memory is spending time with her family.

“The park at the foot of Willow, I have such strong memories of that park, visiting time and time again, playing with my grandparents,” said Cawthorne. “I remember Leuty beach had this lifeguard house that was sort of the sort of the edge of where we were allowed to roam, you know?”

Having moved to Victoria B.C., Cawthorne still made the trip back to the Beach while writing Patterson House to make sure she had things right.

Cawthorne, just entering the space of long-form fiction writing said that it is never too late to pursue your dreams.

Jane Cawthorne’s Patterson House is available for purchase at https://www.inanna.ca/product/patterson-house/