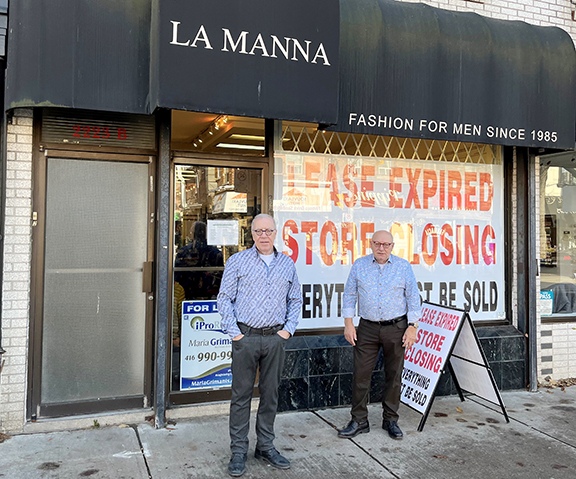 Mario and Angelo La Manna in front of La Manna’s Fashion for Men on Queen Street East in the Beach. The store is closing at the end of December after what has been 38 years of business in the community. Photo by Alan Shackleton.

After what will be 38 years of business on Queen Street East in the Beach, La Manna Fashion for Men will be closing at the end of December.

For owners and brothers Mario and Angleo La Manna, it is time to enjoy retirement.

“It’s time,” said Mario, 70. “We can’t be working until our teeth are falling out of our heads. I think we’ve earned our keep.”

Mario, who lives in the Beach, said he will be taking some time off come January and be in the neighbourhood “taking the dog for a walk.”

Angelo, 75, who lives in Scarborough, said he has lots of plans around the house once retirement officially begins.

“I’ve got a lot of projects on the go to complete, and others that I haven’t even started yet,” he said.

The brothers, who grew up in Leslieville, were always familiar with the Beach area and thought it would be an ideal location to open up their men’s wear store back in 1985. They already had a dozen years experience in the business, but were looking to run their own shop.

“We always liked this location,” said Mario of the store which is on the south side of Queen Street East just west of Wineva Avenue.

“It’s a healthy community and fairly affluent. People were looking for a good men’s wear store in the area and we felt we could offer that,” he said.

Mario remembered that some people had told them the area had a reputation as a “hippie haven” at the time, but they found there to be many customers who were looking for high quality men’s clothing that they could buy in the neighbourhood.

And after almost four decades of serving local customers, both Mario and Angelo said opening in the Beach was a decision they have never regretted.

The store’s busiest times were in the 1980s and 1990s when the area was full of bars, restaurants and customers both locally and from across the city who came to the Beach to shop and socialize.

“There were lots of bars and restaurants. It was a real destination point beyond just the water and the lake,” said Mario.

He said the store has served generations of Beachers and other customers. “The customers were even bringing their grandchildren in.”

While it is not the reason for the store’s closure, both Mario and Angelo said that fashion sense and obligation when it comes to men’s wear has changed drastically since they started in the business. Back then, most men working in offices had to wear suits, or at the very least dress pants, a dress shirt and a tie.

“People don’t buy suits anymore, they don’t dress up as much,” said Mario. “And COVID sealed the deal for that. People were going to work in their pyjamas and sweat pants, and now they don’t want to change or even go back to work in an office. Practically no one has to wear a suit to work.”

That said, the store has increased the amount of upscale casual wear it sells but there are suits and ties for sale for the occasions when one is needed.

Both Mario and Angelo wanted to thank their customers in the Beach community for their strong support over the past 38 years.

“We want to thank everyone for their years of loyal patronage. We’ve made a lot of nice friends and we are sad to be leaving. But it is time to move on to the next chapter,” said Mario.

But before that next chapter begins, the store is having a massive closing sale of its remaining inventory.

“Our final day for the sale and last day of business will be Dec. 31,” said Mario. “But we want our customers to get themselves down here before then to get some great deals and help us close out.”

La Manna Fashion for Men is located at 2223 Queen St. E. The store can be contacted by email at lamannafashionformen@hotmail.ca or by phone at 416-690-1889.