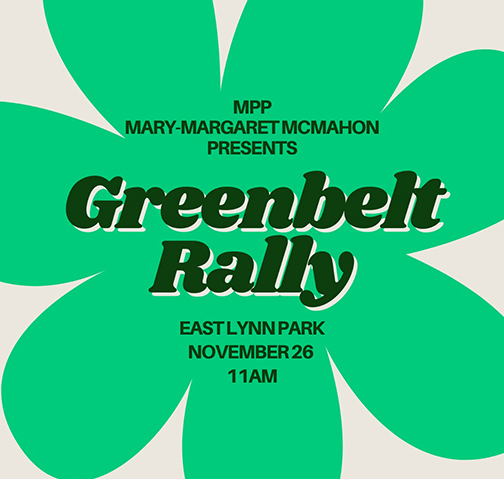 East Toronto residents are invited to a rally in support of the Greenbelt on Saturday, Nov. 26, at East Lynn Park.

The rally is being hosted by Beaches-East York Liberal MPP Mary-Margaret McMahon and will take place from 11 a.m. to 1 p.m.

McMahon said in a release that the purpose of the rally is to let the provincial government of Progressive Conservative Premier Doug Ford that the Greenbelt lands around the Greater Toronto Area should be protected and not opened up for development.

“The government is proposing to remove 15 parcels of land from the Greenbelt — some 7,400 acres in all — to build 50,000 homes. This will be devastating for our environment, leading to more flooding, more expensive food prices, and loss of biodiversity,” said McMahon in the release.

Ford’s government has introduced Bill 23, the More Homes Built Faster Act, which proposes to open up previously protected lands in the Greenbelt for the building of housing. The government said this is necessary to build more affordable housing in the Greater Toronto Area.

However, critics have said it is simply a plan to allow a small number of developers access to build on lands that had been earlier deemed as environmentally sensitive and it will do nothing to increase affordable housing.

McMahon is calling on participants in Saturday’s rally to make their own “wearable ‘green belt. Wear green or bring a green garment to tie around your waist.”

She said a strong turnout by community members will show “power in numbers to save our beautiful environment” and send a strong message to the Ford government.

East Lynn Park is located on the south side of Danforth Avenue, just west of Woodbine Avenue.