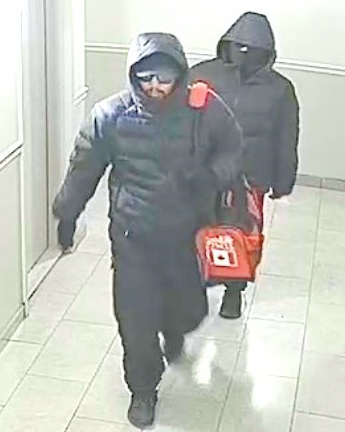 Police are looking to identify these two men in connection with an investigation into an alleged break-in at an apartment in the area of Victoria Park Avenue and Dawes Road.

Toronto police are asking for the public’s help in identifying two men wanted in connection with an investigation into an alleged a break and enter at an apartment building in the Dawes Road and Victoria Park Avenue area earlier this month.

According to police, two men broke into an apartment unit and stole multiple items. They were seen leaving the area in a newer model, dark-coloured Mitsubishi Outlander.

The first suspect is described as having a thin to medium build, moustache or beard and was wearing a dark jacket, dark pants, and dark coloured shoes.

The second suspect is described as having a thin to medium build, and was wearing. a dark coloured jacket, dark pants, and dark shoes.