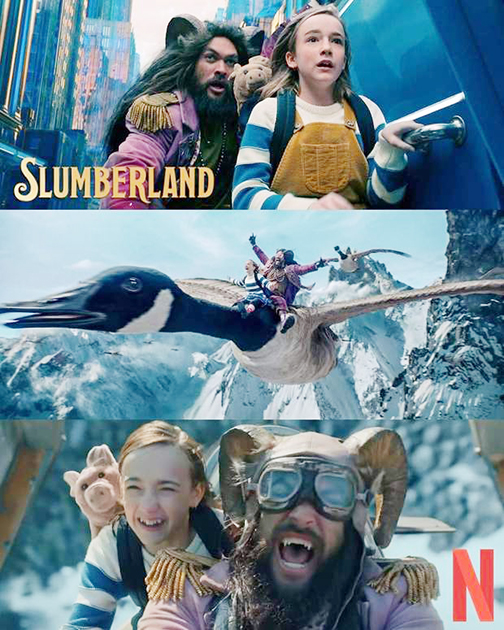 Woodbine Park is a great place to listen to music at a festival, walk your dog, watch the ducks frolic on the pond or fly past majestic, snow-capped peaks on a truly humongoose Canada goose.

Mountains? No problem! All you need is a bit of imagination and a whole lot of CGI (computer-generated imagery) in Slumberland (out on Netflix as of Nov. 18). The film promises “Adventure Beyond your Wildest Dreams.”

Fantasy movies often film the actors in front of a green screen and then use CGI to complete the special effects by using layers, a technique known as compositing.

In April 2021 crews built large scaffolding in the parking lot beside Woodbine Park.

Scenes were filmed with Jason Mamoa and Marlow Barkley on safety cables atop the structure.

Slumberland is a live-action film adaptation of a comic strip, Little Nemo in Slumberland, created way back in 1905.

This modern version tells the story of a young girl whose father has been lost at sea.

Mamoa plays an eccentric half-man, half-beast who promises to help in the quest to find Nemo’s missing dad by guiding her through a mystical dream world.

Sets and the City

The film needed a lighthouse and two elaborate sets were built from scratch, one at the Pinewood Studios between Eastern Avenue and Commissioners Street while the top of the lighthouse was created at Ontario Place. The real structures are blended seamlessly with CGI backgrounds to create a spectacular island landscape.

Watch for scenes at the Royal York Hotel and two city ferry boats.

Sometimes visual effects can go wrong. A gaffe was spotted in a recent episode of The House of the Dragon where the King was wearing a green glove on two fingers which were supposed to be missing or mangled.

At least the medieval King wasn’t holding a Starbucks coffee cup as seen in Game of Thrones!

If you’re “down” with fantasy films, take a “gander” at Slumberland. It’s a family-friendly film so there shouldn’t be any “fowl” language though the little ones may get “goose bumps.”  Too bad Ryan Gosling isn’t in it.

Next time you walk through Woodbine Park imagine worlds beyond our dreams. By the magic of movies our “mountains” never looked so good!