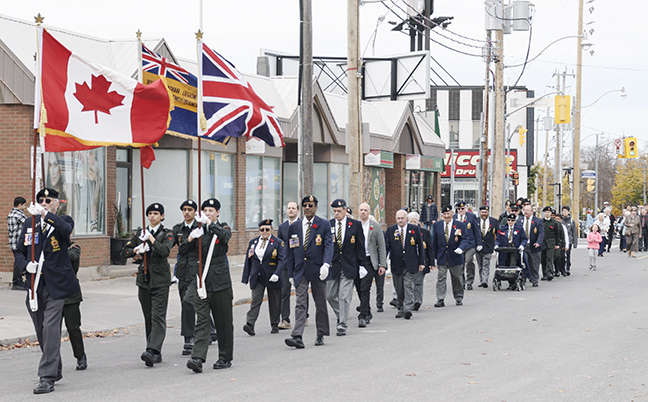 Royal Canadian Legion Branch 11 on Dawes Road held a parade and ceremony on Nov. 6 in advance of Remembrance Day. Photo by Adam Owen-Gill.

I am writing this article after Remembrance Day for a very special reason.

I was standing at the memorial at Kew Gardens and was reading the inscriptions.

Later I was visiting the Baron Byng Legion (Royal Canadian Legion Branch 1/42) on Coxwell Avenue, and noted all the members inside the hall. Then it struck me. All of the time we are preparing for Remembrance Day to honour our great fallen members who died in the service of our free country, but after Nov.11 we forget them.

They are the ones who passed on, the ones who were members of the Army, the Navy and the Air Force and reserves and are still alive. Should we forget them? The answer is No!

Should we forget about them? The answer is No!

We still have a Canadian military that Canada and its citizens can be proud of, and should join to show them we are there and care.

Our armed forces are honoured throughout the world for their contributions in the past and present. We should remember them every day, not only on Nov. 11.

We have an army that is now helping other countries like Ukraine. We are there to help though as we always do. Here in the east end and Beach area, we should be particularly proud of our men and women of the armed forces who sacrifice so much.

We should also recognize the young people in cadets and those who will serve in the future and let them know we respect their valiant contribution to Canada.