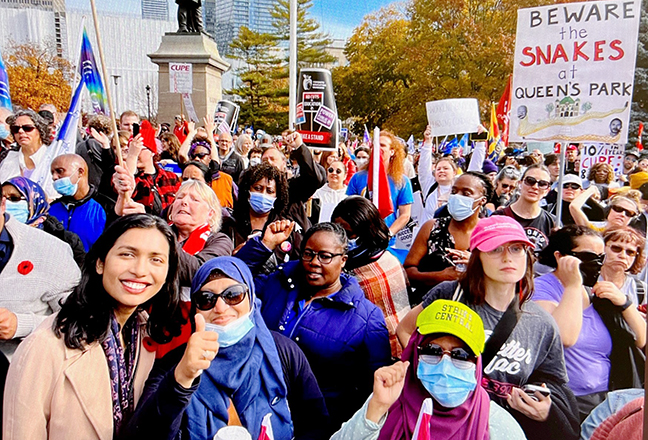 Scarborough Southwest NDP MPP Doly Begum joined education workers in a protest at Queen's Park on Nov. 4 against the use of the notwithstanding clause by the provincial government during labour negotiations. Photo: Doly Begum Twitter account.

Two local MPPs have condemned Ontario Premier Doug Ford and his Progressive Conservative government’s use of the notwithstanding clause in the Canadian Charter of Rights and Freedoms during recent labour negotiations with unionized education workers.

“This notwithstanding clause should never have come into play,” said Beaches-East York Liberal MPP, Mary-Margaret McMahon. “It was not ever meant to be used that way so I’m glad that that has been walked back.”

The bill removed CUPE’s right to collective bargaining legislated a four-year contract on the union and banned the workers from striking by invoking the notwithstanding clause (Section 33) in the Canadian Charter of Rights and Freedoms. It was introduced to stop a potential strike by CUPE workers and to keep schools open and students in them, said the government.

“The fact that the Premier invoked the notwithstanding clause multiple times – especially to trample on the rights of some of the lowest paid workers – was very harmful,” said Scarborough Southwest NDP MPP Doly Begum.

“I think all of that combined really pushed the government to understand that they are really losing this fight and they have chosen the wrong side.”

The Progressive Conservative government used its majority to push the bill through on Thursday, Nov.3. CUPE workers were not on the job the next day or the following Monday.

Although many, like McMahon and Begum, rejected Bill 28, some saw it as a smart political play by Ford as his language targeted the support of parents with repeated attempts at demonizing CUPE for allegedly neglecting the two million children who were forced to stay at home.

However, it appears the Progressive Conservatives miscalculated the backlash that would come from using the notwithstanding clause.

According to a poll by Abacus Data which surveyed 1,000 Ontario residents, 62 per cent of the province blamed the Ford government for the strike. The remainder blamed CUPE. The government’s move also angered unions across the country who vowed they would support CUPE.

“One of the things I think is extremely powerful is seeing how the entire labour movement came together in support,” said Begum, who is also the deputy leader of the Ontario NDP.

“And the solidarity you saw from both public and private sector employees, families, parents, and people across the province who came forward and said that this is unjust.”

It was probably no surprise then that on Monday, Nov. 7, Ford presented an olive branch in the form of an offer to rescind Bill 28. In return, he asked the workers to call off the strike and return to the negotiation table. CUPE obliged and schools were back in session on Tuesday.

Since negotiations resumed, Ford announced that his government has sweetened the contract offer deal. However, there is little known information regarding the specifics of the new offer as the two sides continue bargaining.

Begum said the size of Bill 28, which she described as a “big book”, tells her and her party members that preemptive measures were made by the government to make strikes illegal while the first set of contract negotiations with CUPE were still taking place.

“It’s not something you come up with overnight,” she said. “You need weeks, or months, to prepare legislation like that.”

Ford has remained adamant that he is simply fighting for the students’ stability after the tumultuous period they experienced during the pandemic lockdowns.

But Begum believes that an underserved education system is what creates instability.

“The lack of funding given to our schools–whether its capital funding or funding for day-to-day operations – really strains the entire system,” she said.

“When we have a system that’s slowly breaking apart and really starved, one of the solutions we know to have been done in the past, especially by conservative governments, is to slowly bring in private solutions.”

She was referring to the government giving small payments to parents with hopes that it will make a difference, rather than utilizing that money to enhance the capabilities of Ontario’s schools by fixing the infrastructure and offering better wages.

According to the latest Financial Accountability Office (FAO) reports, Ontario recorded a $2.1-billion budget surplus in 2021-22. This was thanks to “a strong economy driving extraordinary revenue growth” according to Ontario’s Finance Minister, Peter Bethlenfalvy.

However, Begum says this budget surplus is partly to do with austerity as the government cuts funding to essential services such as education. FAO’s previous report showed that the government spent $284 million less on education than it officially budgeted in the full year.

“Why have you decreased $52 million for childcare and early years programs, for example,” she said. “That is a problem.”

As the province recovers from the aftermath of the pandemic and its impact on the education system, many Ontarians are hoping for a peaceful resolution that sees students remain in school and workers receiving a fair wage.

It seems unlikely that a repeat of threats to use the notwithstanding clause will happen through the remainder of these negotiations due to the recent public outrage.

McMahon said she hopes the Ford government has learned its lesson when it comes to recklessly using the notwithstanding clause in issues such as labour negotiations.

“There was a concrete reason [the notwithstanding clause] was placed there, but it should be used judiciously and with full support,” said McMahon. “It’s not to be just whipped out anytime you want to show your power.”