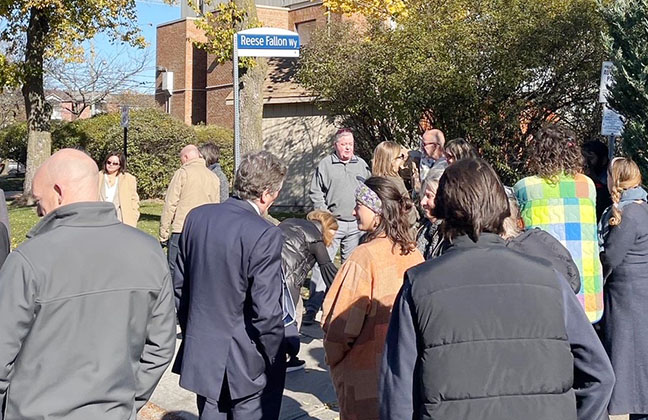 The ceremony to name Reese Fallon Way in the Malvern Avenue and Gerrard Street East area took place on the afternoon of Monday, Nov. 7. Photos: Submitted.

An unveiling ceremony was held Monday, Nov. 7, to officially recognize the naming of Reese Fallon Way in the Upper Beach.

“Four years ago her life was taken in the Danforth Shooting, but her legacy remains strong. With great honour this afternoon, we unveiled the laneway renaming in Reese’s namesake.”

“Reese was a passionate young leader who made a lasting impact in the community. This laneway is a place for all to remember and celebrate Reese,” said McMahon in a tweet.

Reese Fallon Way is located south of Gerrard Street East and runs east off Wayland Avenue and then south – between Wayland and Malvern Avenue to the east.

Fallon had just graduated from Malvern Collegiate prior to the summer of 2018 and lived in the area where the laneway is located. She was planning to begin a nursing course at McMaster University in the fall of that year.

Fallon also worked as a volunteer member of the Young Liberals for the Beaches-East York with current area MP Nathaniel Erskine-Smith.

He tweeted that the laneway named in her memory is a “lasting and important tribute to an amazing young woman taken from us far too soon.”