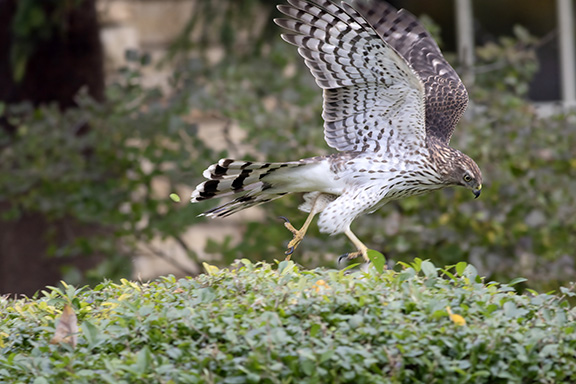 A Cooper’s hawk prepares to run after a squirrel while it learns to hunt. Photo by Ann Brokelman.

Look up at the sky, and down on the ground, as spectacular bird sighting are taking place all over Toronto.

Every day I take out my camera and hope I will see something new. Even when it’s ‘just another sighting’, like the beautiful bushy-tailed red fox I saw just around the corner from my house the other day, I’m thankful for the wildlife in our amazing city.

Just recently, however, I saw something I’d definitely never seen before. I even messaged my son, who helps me put my story ideas on paper, to tell him I finally had a new story about a hawk.

Normally, one expects to see a bird of prey swoop down on its target, right? Maybe it’ll grab a songbird at a feeder, a mouse in a farmer’s field, or a squirrel off a tree branch. I’ve seen all of these situations many, many times over the years.

I don’t, however, think I’ve ever seen one trying to catch its dinner by RUNNING after it. I’m sure you can imagine my double take when I saw this playing out on one of my neighbour’s front yard.

Picture a Cooper’s hawk, a juvenile, running back and forth on its talons and trying to pounce on squirrels it had no chance of catching. It would flap up into a bush, or onto a rock, and sit for a few minutes, look around until it found a target, and then, when the squirrel got close enough, it would hop back to the grass and ‘run’ after it.

After 15 minutes of this, I began to feel bad for the young guy. Multiple squirrels passed through the yard, running within metres of the bird, and never once did the hawk come close to catching one. Not only did they run by him, but they constantly screamed/chattered at him any time he moved. It was almost like they were mocking his inability to catch them.

If you are wondering if the bird might have been injured, please don’t worry. I’ve spent enough time with wildlife rescue to feel confident that this bird was just young and inexperienced.

First, he still had a white chest with a dripping brown coloring, unlike the adults that have a rusty barred chest/belly. More importantly, he still had yellow eyes, compared to the very distinct red eyes of the adults.

This is actually a very dangerous time for young hawks. They are on their own, hunting by themselves, for the first times in their lives. In addition to all the challenges a young hunter might face, (such as learning not to run after their prey when they have been given the gift of flight), they have to contend with unnatural obstacles, such as windows and cars, for the first time.

How is a parent bird supposed to teach its young not to chase a chipmunk into a busy street, or to tell the difference between someone’s window and a clear sky?

Just a few days before I saw the juvenile cooper hawk I had a call from a dear friend, Norma, who has helped me many times with catching mangy foxes, that a juvenile red-tailed hawk had hit one of her neighbour’s windows.

I hopped in the car, got there in just a few minutes, and found the young bird sitting on the railing of her front porch. Wearing thick gloves and armed with a net, which the Toronto Wildlife Centre taught me how to properly handle for bird rescues, I slowly approached the hawk. He, luckily, didn’t make any efforts to escape or panic as I captured him.

The homeowner gave me an old towel and bedsheet, which I used to compliment one of the boxes I keep in my car for just such an occasion, and I managed to get the poor guy as safely boxed up as I could manage.

He’s now in care, and I’m hoping for good rehabilitation news soon. Maybe I’ll be lucky enough to be the one to release him when he’s ready to be back in the wild.

Please keep Toronto Wildlife Centre’s phone number 416-631-0662 in your phone. Should you see wildlife or birds in trouble, please call them. There’s also more info on their website at https://www.torontowildlifecentre.com/